Until 2006, DSV (then DFDS) had operated through agents in India. However, at the time, it became increasingly clear that DSV should establish a presence to further grow the business. And so a team of four Danes was put together and sent on a mission to establish DFDS India.

With the support of DK-based Peter Larsen (now Regional Director, Middle East, Sub Continent and Africa), the team consisted of Lars Nielsen, who had worked with one of DSV’s former Indian agents; Michael Carstensen, who came from an MD role in DSV Indonesia; Christian Hoegh Andersen from DSV DK; and Martin Roos from DSV DK:

"We spread out to the four main metropolises: Delhi, Mumbai, Chennai and Bangalore to establish what we now know as DSV India. I believe we were one of the first Air and Sea entities to use the new consolidated name DSV".

Today, DSV India has nine offices and employs more than 230 staff who produce an annual turnover in excess of USD 50 million.  This is Martin's story…

India is Martin’s first experience as an expatriate – and what an experience: “India is unlike anything I could have anticipated and certainly unlike anything I have ever experienced before”.  The decision to move abroad was easy for Martin, as Denmark is a relatively small country and he has always been eager to experience new cultures and places. “With my personality and mind-set, it was only a matter of time before I would seek challenges outside of Denmark”.

Another aspect of the decision was the career and business prospects.  "The business environment and general pace in India is faster than in most other countries, which obviously generates opportunities that more stable economies simply cannot. So this was a big step up for me," he explains.

Change is the norm

An easy decision turned out to be hard work. It took Martin a year to settle in, not least physically. The food, the climate, the culture and a busy job all proved to be quite the challenge, albeit a welcome one. “I left Denmark to test my own capabilities and limits,” he states. And that has certainly been the case. In India, no two days are the same; the unexpected constantly happens, which requires you to continuously motivate and remind yourself to keep on track.

As it turns out, the thing Martin now appreciates most about India is the climate and the exotic feel – and the many different faces of India. Goa, for example, is only an hour’s flight from Mumbai and a nice retreat from the hustle and buzzle of Indian city life with people literally everywhere.

Paving the way for achievements

In other parts of the world change is not necessarily a good thing or at the very least, it’s a difficult process. But in India, Martin has found that people are ready to change, allowing him and others to quickly see and measure the impact of “what we are trying to build… India is such a vibrant place with a host of opportunities – and populated with very talented people”.

He is slightly annoyed that Indians are sometimes seen as uneducated and unambitious compared to other populations. India is just fundamentally different in so many ways as a result of how the culture and society has been built and established, he emphasises: “And it’s a nation of 1.2 billion inhabitants, which does not compare to, say, a nation of 5 million,” he adds.

Martin is proud of his team. “It’s not a one-man show,” he says; “we have a whole organisation in place with trainees, forwarders, team leaders, heads of department, branch managers etc., the same as everywhere else in DSV. And we’re doing very well.”

Not a nation of elephants and snake charmers

Another misconception about India is that elephants and snake charmers dominate the streets.  There are a lot of stereotypical ideas out there, but they usually boil down to fear of the unknown or little knowledge of today’s India. "I always suggest that people visit and see for themselves. I have the greatest respect for people who do that, even if they end up concluding that India is not their cup of tea. At least they gave it a shot".

Having said that, he does admit there are negatives to life in India – like all other places on the planet. He still finds it difficult to live with issues such as poverty and social hierarchy. “It’s hard to witness and accept that for some people choice and education do not exist.”  He also has a hard time with the general lack of structure and ownership, but knows that continuous follow-up is the key and must be both expected and accepted as the order of the day, even if it can be hard sometimes.

Make sure you have someone to talk to

During his nine years in India, Martin has benefitted from a great network. And he stresses the importance of being active in an expat network:  "Make sure you have someone you can talk to and share local difficulties and challenges with. It’s therapeutical, you get things off your chest, and, if you listen in return, you’ll benefit from another person’s experience with a similar situation".

He continues: “My former manager (Michael Carstensen) was a central character in the expat society, always helping other expats personally and professionally. It is not always appreciated or acknowledged, but it has taught me to always extend a helping hand; you might need it one day yourself. I try to pass on all the advice and learning I have received to the new generation of expats”.

Being a part of a great network is one thing, you also need to be mentally prepared for what you are getting yourself into. It helps to keep an open mind and take the time to learn about local etiquette and culture, so you can apply it to your new role and responsibilities.

I absolutely love it and wouldn’t be without it

Martin currently has no plans to return to Denmark or seek new challenges in another country. He feels he has developed as a person to become more understanding as a result of his encounter with and continued life in India:

"Being an expat has broadened my perspectives on many fronts; I certainly have an improved cultural understanding compared to ten years ago. Now, I try to understand the cultural and social heritage and why people might act the way they do rather than just entering into an argument or a discussion. For me it is important to understand where people are coming from and what could have possibly shaped their opinions".

DSV is a global supplier of transport and logistics services. We have offices in more than 70 countries and an international network of partners and agents, making us a truly global player that offers services worldwide. The effective, professional solutions provided by the company's 23,000 employees enabled DSV to record worldwide revenue of 6.5 billion euro for 2014. 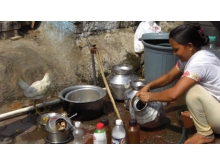 Woman cooking in the street