In the first nine months of 2016, international freight forwarding and logistics company Panalpina recorded a slight increase of EBIT and consolidated profit, when adjusted for the second-quarter restructuring provision of CHF 26 million. EBIT reached CHF 93.6 million and the consolidated profit CHF 72.6 million. Against the backdrop of receding markets in air and ocean freight, Panalpina’s volumes increased by 9% in Air Freight while they decreased by 9% in Ocean Freight. Logistics continued its positive development on the EBIT level.

“Despite shrinking air and ocean freight markets and high margin pressure in the first nine months of the year we delivered an improved EBIT and consolidated profit (both adjusted for one-offs). Continued high cost discipline, particularly in the third quarter, made this achievement possible”, says Panalpina CEO Stefan Karlen. “Our Air Freight and Ocean Freight products developed contrarily. In Air Freight our volumes increased by 9% while they decreased by the same amount in Ocean Freight. This resulted in a practically unchanged overall gross profit when compared to last year.”

Panalpina Group: Results for the first nine months of 2016

“As outlined at our Capital Markets Day at the end of September, we are absolutely committed to maintaining our cost discipline while at the same time intensifying our focus on top-line growth,” says Karlen. “It is our firm intention to grow organically, but also by way of bolt-on acquisitions. In this process, we don’t expect any tailwind from the markets in the foreseeable future.”

In the first half of 2016, Panalpina demonstrated that it can compensate for contracting oil and gas business with organic growth in other sectors even as air and ocean freight markets declined. Adjusted for an oil and gas related restructuring provision, EBIT remained stable at CHF 60.8 million and consolidated profit increased slightly to CHF 47.9 million for the first six months of the year. 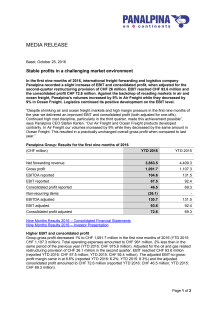 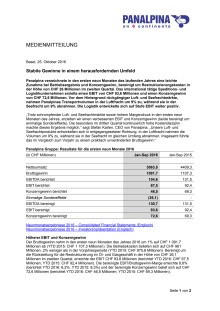 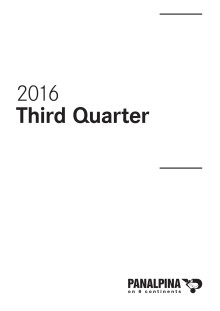