Following last year’s UN Climate Talks in Paris and as part of a global effort to mitigate climate change, Panalpina has delivered on its promise and set science-based emissions targets for the coming years. Panalpina is now one of 32 international companies to have such targets that have been approved by the Science Based Target initiative. The company has also received its latest Carbon Disclosure Project supply chain program score for the year 2015. It is significantly better than the average score of all survey participants including peers in the freight forwarding and logistics industry.

“Panalpina now has a clearly defined budget for greenhouse gas emissions for the years 2013 to 2025. It was calculated independently and based on science. I am proud to say that we have successfully stayed within this budget so far and it is our firm intention to continue to do so,” says Panalpina CEO Stefan Karlen.

The targets were calculated using the Sectoral Decarbonization Approach, a methodology approved by the Science Based Target initiative (SBTI) and which still allows for economic growth of the companies that use it. The SBTI has also officially approved Panalpina’s targets. To date, only 32 companies globally have SBTI approved targets.

Panalpina’s reduction targets are in line with what the Intergovernmental Panel on Climate Change says is necessary to keep global warming below a dangerous threshold. According to this panel of scientists, global greenhouse gas emissions must be cut by up to 70 percent by 2050 to limit global warming to 2 °C and avert irreversible climate change.

“Of course, our efforts will continue beyond 2025. We are in this for the long-run,” says Karlen. “For now, our organization knows what its homework is and we will report on our progress every year.”

For 2015, Panalpina received the second-highest score level, “Management (B)”, from the Carbon Disclosure Project (CDP) for its greenhouse gas emissions and management programs. This is significantly better than the average score level “Disclosure (D)”, and also above-average compared to peers in the freight forwarding and logistics industry.

Under the CDP supply chain program, 89 member companies, representing more than US$2.7 trillion in procurement spend, ask their suppliers to provide detailed information about their environmental impact, management systems and performance metrics. Over 4,300 participants, including Panalpina, responded to the latest survey. Under the new CDP scoring methodology introduced in 2016, companies receive a score represented by a letter and corresponding to the four levels of environmental stewardship (performance bands) and where a score A ranks highest: Disclosure (D, D-), Awareness (C, C-), Management (B, B-), and Leadership (A, A-).

Panalpina’s sustainability framework is divided into four pillars: customers, team, environment and community. The company’s comprehensive environmental initiative includes efforts to expand energy and greenhouse gas monitoring systems and subcontractor engagement. As part of the initiative, Panalpina also raises its employees’ awareness of environmental issues via a yearly event. During the 2016 Global Sustainable Action Week, the company held almost 400 activities in 60 locations, focusing on ways to protect the environment, but also to support the health of employees and fellow citizens, and to help local communities to grow and prosper. For customers, Panalpina launched an advanced CO2 calculation tool for their shipments in 2014. In 2015, Panalpina joined other international companies in the Science Based Targets initiative. 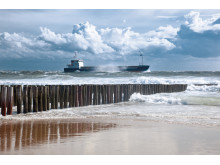 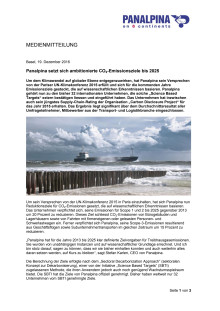