Financial results for the first quarter 2017 came in below the previous-year period for Panalpina. The international freight forwarding and logistics company reported an EBIT of CHF 16.4 million (Q1 2016: CHF 24.0 million) and a consolidated profit of CHF 12.4 million (Q1 2016: CHF 17.3 million). Panalpina outperformed the air and ocean freight markets in terms of volume growth as margins remained under pressure.

“In the first three months of the year, we succeeded in outperforming the markets with volume increases of 8% in Air Freight and 7% in Ocean Freight. As expected, margins remained under pressure, however, they are slowly recovering since we saw an upturn in unit profitability in both Air and Ocean Freight compared to the last quarter of 2016,” says Panalpina CEO Stefan Karlen.

Panalpina Group: Results for the first quarter of 2017

The exit from more underperforming sites meant that the gross profit of the Group’s Logistics product decreased 16% to CHF 82.5 million (Q1 2016: CHF 98.2 million), but with a strong end to the quarter and further improvements in underlying profitability, EBIT increased from CHF 1.8 million to CHF 2.4 million, resulting in the highest quarterly result recorded to date.

“While the challenging market dynamics are expected to continue throughout 2017, we are well-positioned in the market and cautiously optimistic that we can keep up the strong volume growth in Air and Ocean Freight, further gaining market share,” Karlen says. “In a market environment where rates are currently going up instead of down as last year, we also expect to make progress in yield management. One of our top priorities remains, of course, to restore profitability in Ocean Freight.”

Group profitability continues to increase in 2017 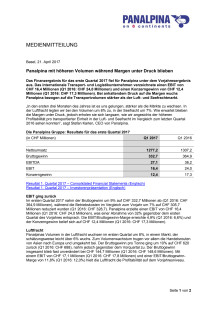 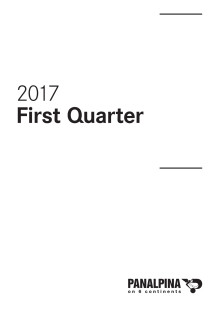