International freight forwarding and logistics company Panalpina ended the year 2018 with a historic record in Air Freight volumes, a recovering Ocean Freight product and solid profitability in Logistics. For the full year, Panalpina’s reported EBIT increased from CHF 103.3 million to CHF 118.4 million (+15%) and the reported consolidated profit increased from CHF 57.5 million to CHF 75.7 million (+32%). In 2019, Panalpina will continue its strong customer focus, push for accelerated growth and launch an industry-leading customer portal.

“Panalpina performed strongly overall in 2018, which was another year with a very dynamic market environment. Air freight growth rates were strongest in the first quarter of the year, but markets slowed down in the following quarters. The softer than expected peak season meant that we could not pass on the higher procurement costs to our customers. For the first time in our history, we broke through the one-million ton barrier, further strengthening our position as one of the world’s top air freight providers,” says Panalpina CEO Stefan Karlen. “In Ocean Freight, we improved EBIT with every quarter, and even though a small loss still resulted for the full year, we achieved the turnaround. Logistics delivered an excellent EBIT result. In all, our service quality was well-received by customers and we successfully executed on our strategy.”

* Proposed to the annual general meeting

In light of the good performance and healthy balance sheet, the board of directors will propose a dividend payment of CHF 3.75 per share to the annual general meeting on May 9, 2019. This is equivalent to a dividend yield of 2.9% (based on the 2018 year-end share price).

“We have put in place a scalable operational platform and organization, and are now eager to push for accelerated, substantial organic and external growth. In 2019, we will even further increase our customer focus. The highlight will be the launch of the new portal that fully digitalizes our customer offerings in a modern, engaging manner. In the long term, this portal will enable our customers to manage their supply chain needs proactively in a self-service mode, and facilitate an automated and fully integrated customer journey with personalized supply chain tools,” says Karlen.

The Panalpina Group is one of the world's leading providers of supply chain solutions. The company combines its core products – Air Freight, Ocean Freight, and Logistics and Manufacturing – to deliver globally integrated, tailor-made end-to-end solutions for 12 core industries. Drawing on in-depth industry know-how and customized IT systems, Panalpina manages the needs of its customers' supply chains, no matter how demanding they might be. Energy and Project Solutions is a specialized service for the energy and capital projects sector. The Panalpina Group operates a global network with some 500 offices in around 70 countries, and it works with partner companies in another 100 countries. Panalpina employs approximately 14,500 people worldwide who deliver a comprehensive service to the highest quality standards – wherever and whenever. 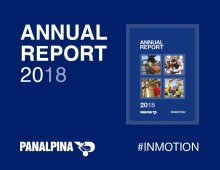 Panalpina continued to deliver innovative, end-to-end supply chain solutions in 2018 to its customers in a wide range of industries. The Management Report 2018 highlights the company’s key achievements in expanding its services and footprint as well as carrying out complex freight forwarding and logistics projects.

Annual general meeting of Panalpina approves all board proposals

At the annual general meeting (AGM) of Panalpina World Transport (Holding) Ltd., held on May 9, 2019, 62.24% of the share capital was represented. All proposals of the board of directors were approved by a clear majority and Thomas E. Kern was elected as chairman of the board. 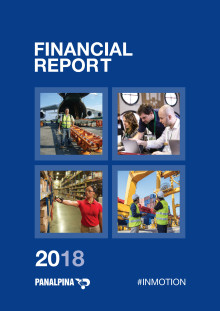 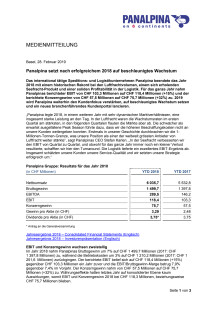