70 tons of primary medical care goods such as antibiotics, analgesics, infusion sets and hospital equipment, provided by UNICEF, arrived in Burundi’s capital Bujumbura this morning on a flight chartered and donated by Panalpina. The company’s Charter Network had organized the relief flight which left Europe the night before. The vital goods will be distributed to Burundi’s health centers which are the first place to go to for medical assistance.

“These relief goods can save the lives of thousands of children,” says Elsbeth Mueller, executive director of the Swiss committee for UNICEF. “On behalf of UNICEF, I deeply thank Panalpina for their help.”

Burundi is one of the poorest countries in the world. The small, landlocked country in East Africa, which has known cycles of recurring violence since its independence, plunged into crisis again in April 2015. The current crisis has so far left more than 200 people dead, with more than 200,000 Burundians crossing borders to seek safe shelter in neighboring countries.

While violence flares and nightly raids continue, children are increasingly under threat. As half of Burundi’s population, they have been suffering disproportionately from the surge in violence.

With the withdrawal of bilateral aid by numerous donor governments, UNICEF expects that social services for children, in particular health care and education, will be severely impacted over the coming months.

Nearly one child out of ten dies before age five. Easily preventable and treatable diseases including pneumonia, diarrhea and malaria are often responsible for these tragic deaths. The current crisis has led to an acute shortage of medication and hospital equipment, and a timely supply of essential drugs for quick treatment is therefore critical to improve child health and survival in Burundi.

“This is the third time that Panalpina is partnering with UNICEF to address a crisis in Africa. And again we hope that our contribution will bring some respite to those who are less fortunate than us, especially the many affected children in Burundi,” says Panalpina’s CEO Peter Ulber.

The idea for the Panalpina relief flights came about in 2013 during discussions about the company’s traditional Christmas gifts for customers and employees. It was decided that a charitable donation in the form of an aircraft charter for UNICEF would be of more value. 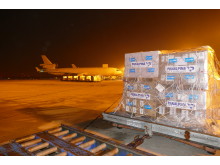 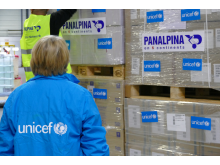 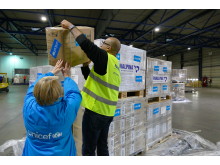 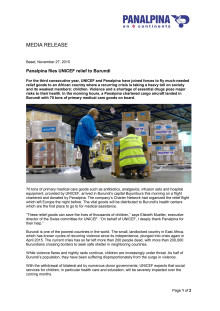 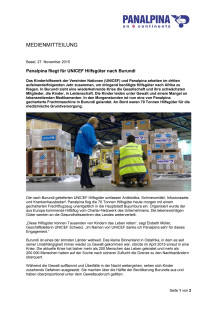