Panalpina once again assisted UNICEF by flying relief aid to Africa, this time to help children suffering in South Sudan. The country’s humanitarian crisis is a culmination of years of civil war compounded by famine and disease. A Panalpina chartered cargo aircraft landed in the early hours of Saturday morning in neighboring Uganda, carrying nearly 80 tons of supplies including emergency shelters, water treatment equipment and medical kits. The supplies are now being trucked to their final destination.

Panalpina’s Charter Network arranged the flight in support of the respected UN organization. The consignment of relief aid left Belgium on Friday afternoon and items such as tents, water pumps, sterilization kits and medication to fight infectious diseases, supplied by UNICEF (the United Nations International Children’s Fund), are now headed for families in dire need of help.

“The children of South Sudan are suffering greatly because of over four years of conflict,” says Elsbeth Mueller, Executive Director of the Swiss committee for UNICEF. “Our mission is to provide life-saving medical supplies and much-needed equipment to help them, and we are very grateful that Panalpina has once again donated the transportation of the goods.”

The Republic of South Sudan only gained its independence from Sudan in 2011, yet its people are suffering from ongoing problems, with catastrophic results. Decades of guerilla warfare that began in the 1980s, resulted in the deaths of more than 1.5 million people, and a fragile peace was disrupted again in 2013 when civil war broke out. Warfare has led to the decimation of hospitals, clinics and schools, leading to the loss of health provision, social care and education. A lack of safe drinking water and inadequate sanitation has led to widespread disease, and famine affects approximately half the population. Malaria, cholera, diarrhea and pneumonia are prevalent, and one in ten children dies before reaching the age of five.

For the flight chartered and donated by Panalpina, UNICEF gathered nearly 80 tons of relief aid, including tents and tarpaulins for emergency shelters, mobile water tanks and pumps, as well as water purification tablets. UNICEF drills boreholes for water to be brought to the surface by the mobile pumps, and the water is then treated with purification tablets to make it safe to drink. The supply cargo also included medication and medical supplies, as well as recreation kits such as balls and toys, to help children live as normal a life as possible in spite of the country’s social problems.

The flight took off from Liège (Belgium) in the afternoon of December 15, and arrived in Entebbe (Uganda) in the early hours of December 16. For logistical reasons, it was decided to fly into Uganda from where the cargo is now being transported by trucks to South Sudan.

“This is the fifth time that Panalpina has partnered with UNICEF and donated a relief flight to address a crisis in Africa. We are doing this instead of making gifts to customers and employees before Christmas. The goal remains the same: to bring some respite to those who are less fortunate than us, especially children,” says Panalpina’s CEO, Stefan Karlen.

Last year, Panalpina flew much-needed relief goods to Chad, where malnutrition and natural disasters had led to a health emergency. In 2015, Panalpina supplied a charter flight to Burundi, where a recurring crisis and violence took a heavy toll on society. In 2014, Panalpina supported the fight against Ebola by flying life-saving humanitarian aid to Sierra Leone. In 2013, Panalpina’s first relief flight for UNICEF took goods to the Central African Republic. 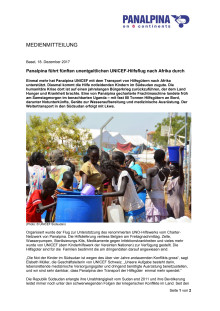