“In the first three months of the year, we succeeded in counterbalancing the lower transport volumes in oil and gas. This was due to the positive development in the rest of the business as well as the fast adjustment of our cost base,” says Panalpina CEO Peter Ulber. “The results reflect our changing business mix. While the contraction in oil and gas continued, we saw growth in all the other industries that we serve.”

Panalpina Group: Results for the first quarter of 2016

EBIT down by one million

The company’s continued exit from underperforming sites meant that the gross profit of the Group’s Logistics product decreased 6% to CHF 98.2 million (Q1 2015: CHF 104.7 million), but EBIT increased from CHF 1.2 million to CHF 1.8 million.

“The tough comparison due to the decline in the oil and gas business will remain for the second quarter of the year, but we have shown that we can continue to be profitable and ride out the storm,” Ulber says. “Regardless of the current market situation, servicing our oil and gas customers remains a core offering of Panalpina, and with our in-house transport engineering department and projects expertise we can provide unique solutions for the sector. At the same time, we will continue to balance our business and product mix throughout the year.”

The Panalpina Group operates a global network with some 500 offices in more than 75 countries, and it works with partner companies in a further 90 countries. Panalpina employs 15,000 people worldwide who deliver a comprehensive service to the highest quality standards – wherever and whenever. 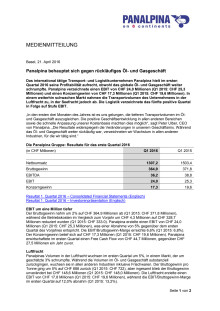 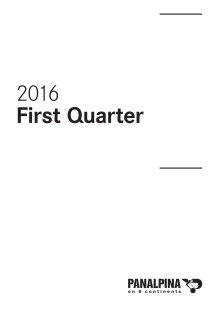 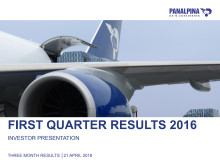