Companies receive scores from A to D for how effectively they are tackling climate change. Those that provide insufficient information, or none at all, are marked with an F. CDP assesses companies on the comprehensiveness of their climate disclosure as well as their awareness and management of environmental risks. It also takes into account how companies demonstrate best practices and environmental leadership, such as setting ambitious and meaningful targets.

“We are proud to have achieved an A- score from CDP, which puts us in the top six percent of 7,000 responding companies,” says Lindsay Zingg, Panalpina’s global head of quality, health, safety and environment. “Panalpina is in a top league of only four third-party logistics providers globally with an A-level CDP score. This underlines our commitment and is great news for our customers who look for leadership in their suppliers to help them achieve their own ambitious sustainability goals.”

Another top rating for CSR

Panalpina has also set its sights on the sustainability of its transport providers. It was among the first 50 companies globally with approved Science Based Targets.

“Having science-based, approved CO2 emission targets shows true willingness to lead in mitigating climate change, and demonstrates that these targets are in line with the goal to keep the world from warming beyond 2º Celsius,” explains Zingg.

Besides other targets, Panalpina commits to reduce CO2 emissions from subcontracted transportation by 25 percent by 2030 (baseline 2017).

Panalpina has published its second integrated management report, summarizing the company’s activities during 2017 in terms of business performance and sustainability. 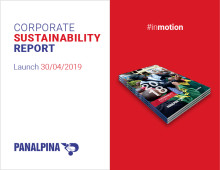 Panalpina achieved its best year ever in terms of employee health and safety and received top ratings for its environmental and corporate social responsibility programs. The 2018 Sustainability Report demonstrates Panalpina’s strong commitment to sustainability, the health and safety of its people and the prosperity of the communities where it operates. 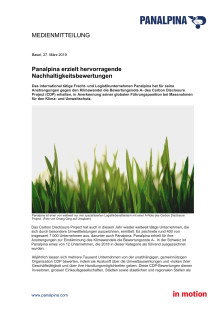