Aiming at responsible development in ocean freight, Panalpina and CMA CGM have signed a sustainability agreement for maritime transport.

“Partnering with strategic partners such as CMA CGM that are technology driven and share a similar vision of sustainability, and using them to transport our customers’ cargo will help us achieve our ambitious sustainability goals,” says Lindsay Zingg, Panalpina’s global head of quality, health, safety and environment (QHSE). Panalpina is one of only 140 companies globally with approved Science Based Targets where the company – amongst other targets – commits to reduce CO2 emissions from subcontracted transportation by 22 percent by 2025 (baseline 2013).

CMA CGM, one of the world’s largest box ship carriers, aims to reduce carbon emissions per standard container (TEU) transported by 30 percent by 2025 (baseline 2015). “We are determined to reach that goal by investing in highly fuel-efficient vessels, making constant technical improvements, and retrofitting our fleet,” says Julien Topenot, head of environment and sustainability at CMA CGM.

Marseilles-based CMA CGM, which recently celebrated its 40th anniversary, was the first shipping company to order container ships propelled by liquefied natural gas (LNG). Nine LNG-powered mega-vessels or ULCVs (Ultra Large Container Vessels) with a capacity of 22,000 TEUs are scheduled for delivery in 2020. “Compared to current fuel-powered vessels, our new LNG vessels will enable a reduction of up to 25 percent in CO2. They will also generate 99% less sulphur emissions, 99% less fine particles and 85% less nitrogen oxides emissions,” explains Topenot.

“We are already using CMA CGM’s most efficient and environmentally-friendly services. With this new agreement, both Panalpina and CMA CGM reinforce their commitment to sustainability,” adds Zingg.

In 2017, Panalpina transported 1.5 million TEUs, making it the fourth biggest ocean freight forwarder in the world.

In the same year, with a fleet of approximately 500 vessels including energy-efficient ships such as the Antoine de Saint-Exupéry and more than 200 services that cover all of the world’s seas, CMA CGM transported 19 million TEUs.

For the environment and more

The scope of the sustainability agreement between CMA CGM and Panalpina goes beyond the reduction of the environmental impact via eco-friendly transport solutions. The companies have committed to collaborate, innovate and improve in four key areas: the environment, ethics and compliance, social responsibility, and community. Initiatives where CMA GGM and Panalpina intend to work more closely together include occupational health and safety programs, local sourcing as well as emergency relief and support.

Since January 2015, Panalpina automatically calculates all customers’ emissions based on the reporting standard EN 16258. In December 2015, Panalpina committed to the Science Based Target Initiative, setting approved science-based targets and thus agreeing to actively manage emissions through reduced energy use and stakeholder engagement. Panalpina was one of the first companies globally to have such targets approved. They are in line with the views of the Intergovernmental Panel on Climate Change (IPCC) to keep global warming below a dangerous threshold. According to this panel of scientists, global greenhouse gas emissions must be cut by up to 70% by 2050 to limit global warming to 2 °C and avert irreversible climate change. In a new report published on October 8, 2018, the IPCC highlighted a number of climate change impacts that could be avoided by further limiting global warming to 1.5 °C instead of only 2 °C.

Following the International Maritime Organization’s historic decision in April of 2018, aimed at reducing the total annual greenhouse gas emissions by at least 50% by 2050 compared to 2008, CMA CGM reaffirmed its commitment towards the protection of the environment with the new 30-percent reduction goal by 2025. Prior to this, the CMA CGM Group had already developed several innovations (fleet and engine optimization, creation of Fleet Centers, etc.), which led to a reduction of its carbon emissions by 50% between 2005 and 2015 and by 10% in 2017 compared to the previous year.

CMA CGM is a leading worldwide shipping group with a young and diversified fleet of approximately 500 vessels. Its ships call 420 of the world’s 521 commercial ports. In 2017, they carried 18.95 million TEUs (twenty-foot equivalent units). Headed by Rodolphe Saadé, the CMA CGM Group is present in more than 160 countries with 755 agencies and more than 30,000 employees worldwide. 4,500 employees work in France, of which 2,400 at the Group’s head office, the CMA CGM Tower in Marseilles, the city where the company was founded in 1978 and today is the largest private employer.

Panalpina has published its second integrated management report, summarizing the company’s activities during 2017 in terms of business performance and sustainability. 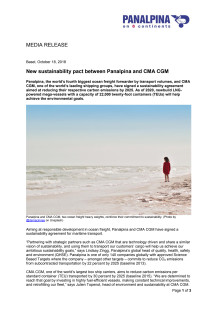 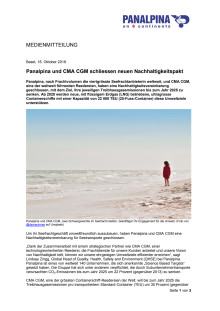