The international freight forwarding and logistics company Panalpina recorded robust volume growth in both Air and Ocean Freight in the first half-year of 2017. As higher freight rates and margin pressure persisted in a continuously challenging market environment, Panalpina increased its reported EBIT from 34.7 million (adjusted half-year 2016: CHF 60.8 million) to CHF 42.0 million and the reported consolidated profit from CHF 21.8 million (adjusted HY 2016: 47.9 million) to CHF 29.9 million for January to June 2017.

“Thanks to strict cost management we improved EBIT quarter-on-quarter in the first half-year of 2017 and restored profitability in Ocean Freight in the second quarter,” says Panalpina CEO Stefan Karlen. “With the successful implementation of our new IT system in the key market Germany, we also gained further momentum in our operations transformation program.”

Panalpina Group: Results for the first half of 2017

As the turnaround of underperforming sites continued, the group’s Logistics gross profit decreased 18% to CHF 163.9 million in the first half-year (HY 2016: CHF 198.9 million), but profitability increased further in the meantime: Logistics posted a reported EBIT of CHF 5.4 million for the first six months of 2017, compared to CHF 0.3 million (adjusted HY 2016: CHF 4.1 million) for the same period of last year.

“We expect ocean carriers and airlines to be much more disciplined than in previous years in managing transport capacity and sustaining freight rates,” says Karlen. “While we are confident that we can improve unit profitability in Ocean Freight in the second half of the year, unit profitability in Air Freight will remain under pressure. We will therefore concentrate on what we can influence directly: controlling cost very effectively and pushing ahead with our operations transformation program.”

Group profitability continues to increase in 2017 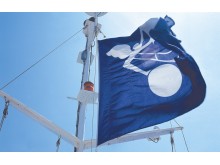 It symbolizes the idea that success in a global company can be achieved through one's own effort, accompanied by good fortune and the spi... 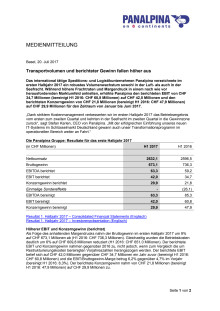 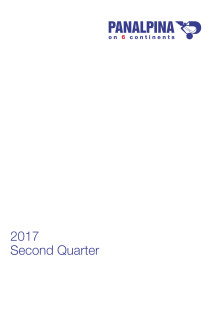