A scheduled shutdown of a deep-water oil platform is no small undertaking. The planning involved to ensure teams are able to complete the maintenance tasks in the needed timeframe is critical. And with a plan for 60 days of maintenance, every additional day of lost production due to delays translates into considerable losses for the operator. For one Panalpina customer, their entire maintenance plan would have been derailed if not for Panalpina’s innovative African Star solution for transporting large shipments from the U.S. to Angola expeditiously.

The planned maintenance for the customer’s deep-water platforms in Angola was entirely dependent on the arrival of four heat exchangers from a supplier in Louisiana. All four pieces had to be on the platform by May 28 to avoid significant production losses. The customer contacted Panalpina in September 2018 to begin making plans. Since the heat exchangers were being built, the team had to work from drawings to design the plan for packing and transporting the cargo.

The two smaller heat exchangers (7,081 kg each) were ready first and were securely packed and shipped out on May 7 from Houston, Texas via Panalpina’s African Star air and ocean freight solution. This unique service is designed specifically to meet the stringent air freight delivery requirements of the oil and gas clientele in Congo and Angola. The multi-modal concept delivers freight direct to shore base along the coast, thus avoiding bottlenecks and long customs delays often experienced when importing via conventional methods.

For the two larger exchangers (16,524 kg each), time was more critical because they were not completed and available for pick-up from the supplier facility until May 19, with the same delivery deadline of May 28. To make this happen, Panalpina’s engineering team, along with the Atlas Air special loads team, continuously redesigned the shipping skid and pallet tie-down in the 10 days prior to ensure safe and compliant transport. The morning of May 19, Panalpina representatives were on-site at the supplier facility before sunrise to begin packaging the units. Late that evening after many discussions and changes, the trucks departed for Panalpina’s Huntsville air freight gateway. From there, the service timeline was aggressive:

“With only seven days to deliver such fragile and critical components, the trust the customer put in our team was immeasurable,” says Matthias Frey, global head of the Panalpina Charter Network. And as promised, Panalpina delivered once again, thanks to this unique solution for its oil and gas customers with African operations.

Panalpina was recently called in for help by one of its largest oil and gas customers in Angola to avoid a shutdown at one of their main offshore platforms. A critical cargo of specialized pipes, bundles and racks had had to be moved from Malabo in Equatorial Guinea to Cabinda, Angola in a port-to-port operation, and Panalpina deployed its African Star to save the day. 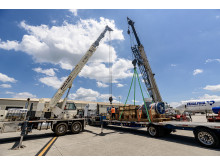