Yesterday, Panalpina completed its third charter to New York City in less than a month for one of its customers in the fashion industry. The Spirit of Panalpina, our Boeing 747-8F, took part in the operation, planting its wheels at JFK Airport heavy with fashion garments from Italy and Switzerland.

“With 12 days left of the year, we will reach the highest volume in our company’s history for the second year in a row,” says Lucas Kuehner, Panalpina’s global head of Air Freight.

Panalpina’s Air Freight record ends a year that has not been quite as strong as 2017 in terms of overall market growth.

“This was to be expected. 2017 was really an exceptional year with a market growth of 10%. We estimate air freight market growth for 2018 to come in at 3-4%, which, in absolute numbers, still signifies good growth,” comments Kuehner.

Throughout the year, carriers have managed capacity well, which led to a lower share of allocations and block-space agreements as well as higher rates to the tune of 15-20% on selected trade lanes.

“The disciplined capacity management gave the carriers room to play in the spot market in anticipation of higher rates and potentially more attractive ad hoc charters during peak season. As a result, capacity has been scarce on selected trade lanes. The few freighters that were delivered in 2018 mostly went to the integrators, adding to the capacity crunch,” explains Kuehner.

The Spirit of Panalpina was in high demand throughout the year, showing load factors well above industry average. Panalpina leases the nose-loading Boeing 747-8F plane on an ACMI (Aircraft, Crew, Maintenance and Insurance) basis from Atlas Air. It is the backbone and star of the Panalpina Charter Network.

As part of the Panalpina Charter Network, Panalpina also charters either whole aircraft or arranges part-charters. This happens on both a scheduled and ad hoc basis. In 2018, Panalpina has organized hundreds of charters and, additionally, deployed hundreds of on-board couriers to overcome all sorts of emergency issues.

In the US, the Spirit of Panalpina usually calls at Huntsville, Alabama, but Panalpina’s charter experts can redirect it to any suitable airport worldwide to meet customers’ requirements, New York being one example.

Speaking of which, if you are in New York, you can catch a glimpse of the Rockefeller Center Christmas Tree until January 7, 2019. This year, the iconic tree is lit up by 50,000 LED lights and topped off with a dazzling star made up of 3 million Swarovski crystals.

And while you’re at it, why not stroll down Fifth Avenue and shop some of the clothes and accessories that Panalpina has just flown in and distributed directly to selected boutiques.

For more background on the 2018 air freight peak season and a brief outlook on 2019, check out this article on Lloyd’s Loading List. 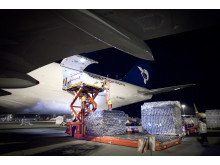