The 'Love Plane' marks the first direct full freighter flight from Nairobi to Sydney with a Boeing 777F. And Panalpina is the first and only freight forwarder with this service offering in the market. The special delivery of 1.6 million roses follows the expansion of Panalpina’s cold storage facility in Nairobi’s Jomo Kenyatta International Airport in November 2018, which will enable the company to move a projected 80,000 tons of flowers, fruit and vegetables in and out of Kenya by 2020.

“Some say love makes the world go round. Panalpina makes things go round the world, and we’re happy to make Valentine’s Day much more special for our friends down under,” says Quint Wilken, Panalpina’s global head of Air Freight Perishables.

Panalpina continues to expand and invest in Kenya, doubling its cold storage space at Nairobi’s Jomo Kenyatta International Airport to enable more and improved services for its perishables customers in and out of the country.

What are perishables – and how do you pronounce that word anyway?

How do you say ‘perishables’? What are perishables in different languages? Panalpina tested visitors at Fruit Logistica in Berlin, the main event for the global perishables industry. See what they had to say…

Is a cherry a berry?

Is a cherry a berry? It all depends who you ask. Panalpina put this question to visitors at Fruit Logistica in Berlin, the main event for the global perishables industry. Get your facts right.

From local hero to global player in the growing perishables market

Panalpina has acquired seven companies specializing in the worldwide export and import of perishables since 2015. With its vision to become the preferred global supplier of perishables logistics by 2020, Panalpina not only acquires companies in the sector, it then also invests locally to develop the business further and support the communities where they operate. 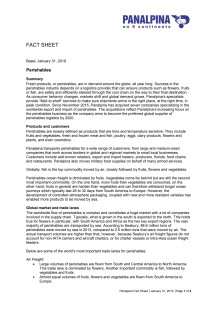 Perishables are in demand around the globe, all year long. Success in this industry depends on a logistics provider that can ensure products such as flowers, fruits or fish, are safely and efficiently steered through the cool chain on the way to final destination. Panalpina has acquired several specialized companies and aims to become the preferred global supplier of perishables logistics by 2020.