Looking for one of the smallest particles – neutrinos – requires not only international cooperation but also quite a huge piece of scientific equipment. Panalpina recently helped to move one from CERN in Switzerland to Fermilab at the University of Chicago, where it arrived at the end of July 2017. It was a closely watched voyage: Fermilab, America's particle physics and accelerator laboratory, used the hashtag #IcarusTrip and a dedicated website (http://icarustrip .fnal.gov/) to follow ICARUS (Imaging Cosmic And Rare Underground Signals) along the way. Special sensors monitored the status of the shipment.

The ICARUS detector is the largest liquid-argon neutrino hunter in the world. It began its life in Italy seeking out elusive particles using pioneering technology, and for the past two years has been undergoing upgrades at CERN, home of the Large Hadron Collider (https://home.cern/topics/large -hadron-collider).

Panalpina's Energy and Project Solutions in Zurich were awarded by CERN, the European Organization for Nuclear Research, with the very delicate task of organizing the transport of the ICARUS detector in two custom-built “out of gauge” containers from Meyrin in Switzerland to Batavia (IL) in the USA.

Each container measured 20.13 m in length, 4.29 m in width and 4.35 m in height, and weighed 57 tons. Due to the very delicate nature of all the built-in electronics, both containers were monitored by state-of-the-art shock sensors. These can detect all kind of events lengthwise and transversely (X- and Y-axis), no matter how small. Two solar-powered independently working GPS location units placed on the containers monitored the movement of the shipment.

At each reloading of the containers from one mode of transport to the next one, all recorded events coming from the shock sensors were uploaded/diagnosed and reset by CERN employees to immediately determine whether some damage could have occurred during the last transport section. 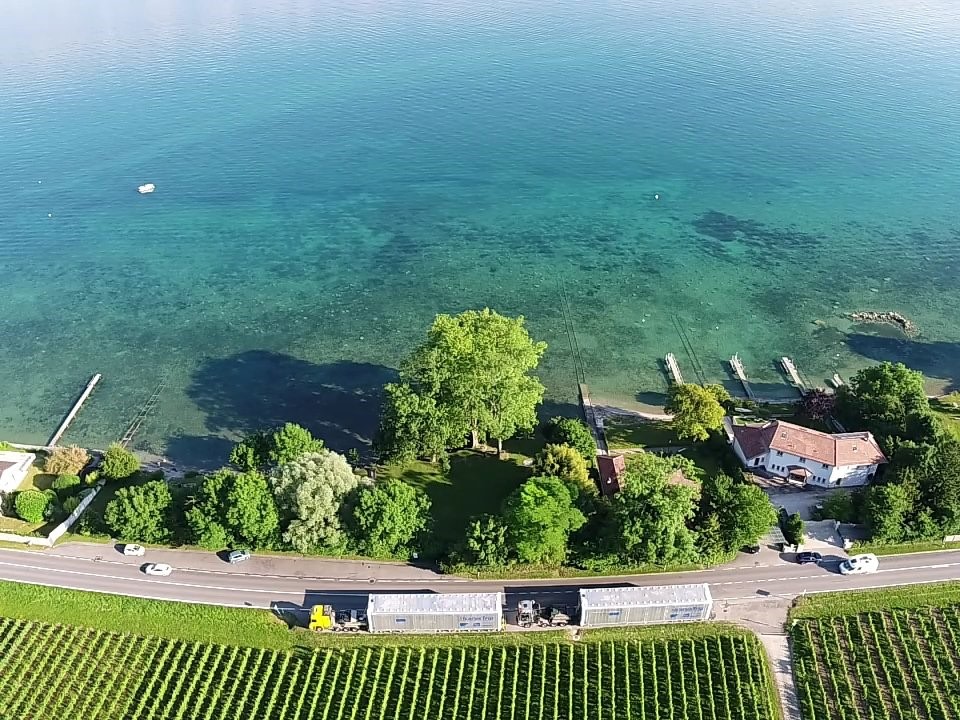 The ICARUS detector by Lake Geneva on its way to Basel.

Over land, river, and ocean

The containers were moved in a convoy during three nights using two hydraulic platform trailers from Meyrin to Basel where the mode of transport switched from road to barge. After four days of sailing on the river Rhine, the containers arrived in Antwerp. Then they were loaded into a multipurpose vessel for 16 days of sailing from Antwerp via the Saint-Lawrence River-and the Great Lakes to Burns Harbor at the far south end of Lake Michigan. The containers were loaded onto two hydraulic platform trailers and stored in the warehouse at Burns Harbor until all the road permits and utility plans were in place. The two containers then moved from Burns Harbor up to the final destination in Batavia, close to Chicago, which took three days.

According to CERN and Fermilab, the containers were delivered on-time to its final destination. It will be installed in a recently completed building and filled with 760 tons of pure liquid argon to start the search for neutrinos. ICARUS will play an instrumental role in finding these elusive particles. The outcomes of this mission could rewrite our understanding of the universe.