This coming week, Panalpina will assist UNICEF (the United Nations International Children’s Fund) for the sixth time by flying relief aid to Africa. The Panalpina Charter Network is in final preparations for the flight in support of the respected UN organization.

Same as last year, the flight – chartered and donated by Panalpina – will go to Uganda, from where the relief goods will be trucked across the border to South Sudan. Some of the relief goods will then likely be flown by giant UN helicopters to remote regions in the country to help mostly children, women and families in a country affected by one of the world’s worst humanitarian crises.

The following report was written by journalist Peter Martell earlier this year and shows how getting aid to the people who need it most requires extreme efforts. The report also impressively illustrates how every ton of relief goods makes a very big difference to thousands of people who often have not had aid for years. 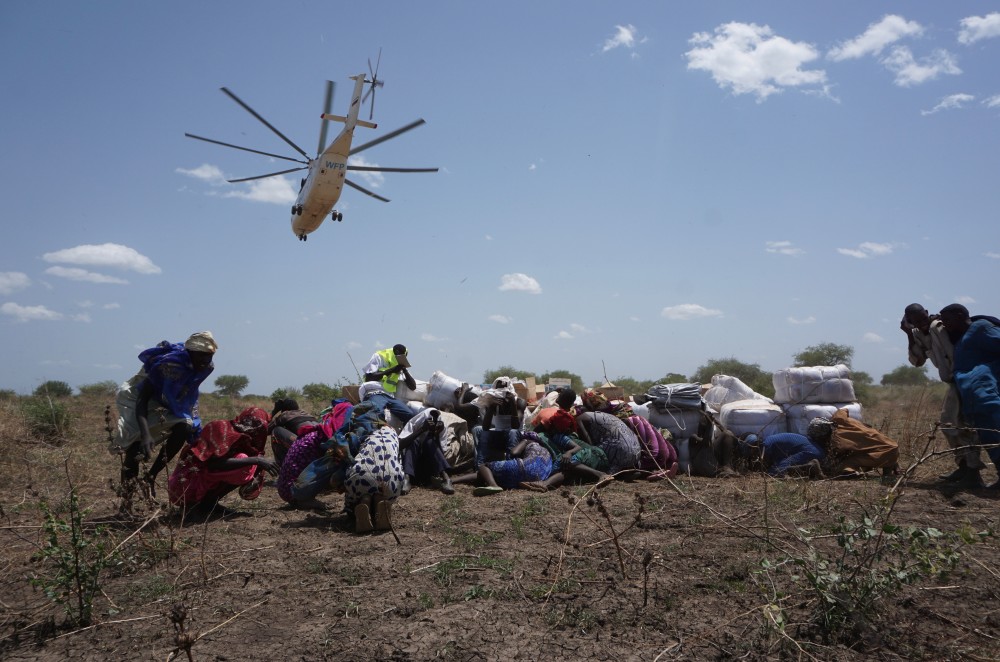 UDIER, South Sudan – For a moment, the sky goes dark. Stinging clouds of dust are whipped up as the giant UN helicopter takes off.

On the ground, aid workers and residents of the remote South Sudanese town of Udier use the cargo the helicopter has dropped as a temporary shelter from the storm.

The Russian-made Mi-26 helicopter is the world’s largest, originally designed to carry heavy military kit. Here it is delivering four tons of aid.

“This will make a very big difference to the people,” said Lual, sweeping off a layer of dirt to read the labels on the tumbled box, after the wind calms with the helicopter gone. “We have not had aid like this here for years.”

South Sudan is one of the world’s worst humanitarian crises. Civil war erupted in 2013, ripping the young nation apart. Millions of people have been forced from their homes, and millions more are in need. Children are especially suffering. Many areas have been effectively cut off from the outside world almost entirely.

Getting aid out to the people who need it most also requires extreme efforts. So the UN Children’s Fund, UNICEF, alongside partners from the World Food Programme, WFP, have developed what they call the Integrated Rapid Response Mechanism, or IRRM.

It is a complicated technical term for a mission with a simple focus; an airborne aid operation to drop in teams and tonnes of supplies into some of the most inaccessible and dangerous areas anywhere in the world.

Since the war began, hundreds of helicopter missions have provided aid for millions of the most vulnerable people.

“We target several areas at the same time,” said Selina Ayangi, a UNICEF team leader for the mission to Udier. “That includes tackling severe malnutrition with mass screenings of children, and providing treatment with supplementary feeding. For health, we give vaccinations, and for hygiene, clean water and sanitation kits.”

In the baking heat, the South Sudanese specialist in nutrition is organising a long line of volunteers, tackling the heavy work of hauling the cargo through thick scrubland from the helicopter drop zone. 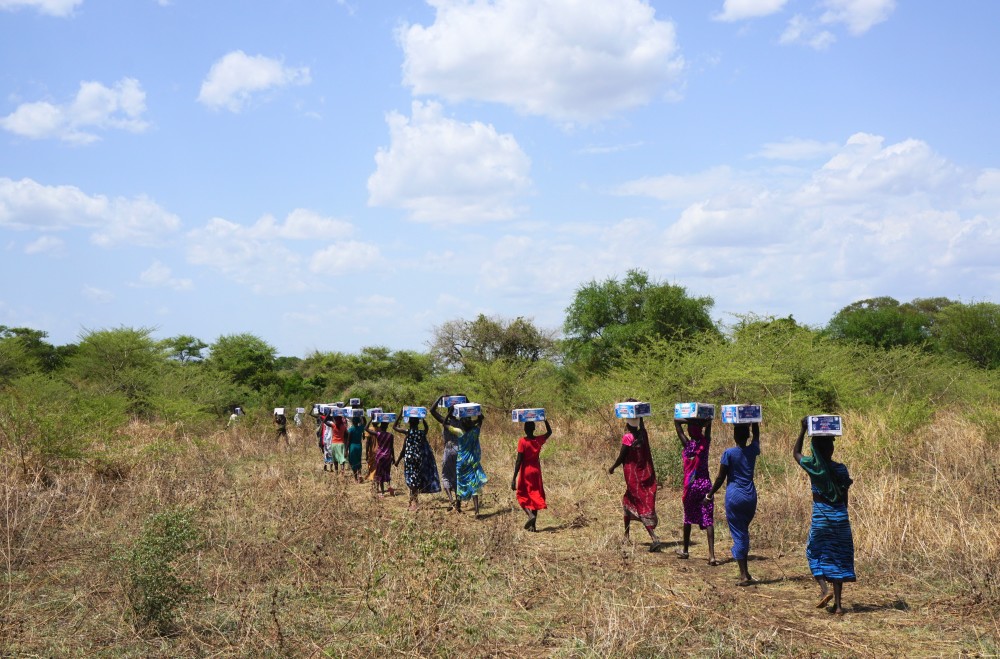 “Logistics are a big challenge,” she said, as men carry chests of measles, tetanus and polio vaccines in giant cool boxes out of the burning sun. With no power to refrigerate the several thousand precious vaccines, they must be given out as soon as possible.

“It is a three-hour helicopter flight here,” Ayagi added. “We’re operating without electricity or phone signal. If you forget something, or need something else, you just have to work with what you’ve got.”

The first helicopter drops the team and their kit, including tents, food and even drinking water. They set up a base ready to support tens of thousands of people, training local volunteers to not only help manage vast crowds but also to assess for malnutrition and give injections of vaccines. They all must be ready to act as soon as aid is delivered days later via cargo helicopter.

After that, the team is on its own – until a recovery flight is sent to pull them out after around 10 days.

The missions require aid workers take considerable risks. At least a hundred aid workers have been killed in South Sudan in five years of war. Dozens have been kidnapped. “The situation here now is calm,” Aynagi said. “But there have been times we have had to evacuate when things have not been good.” 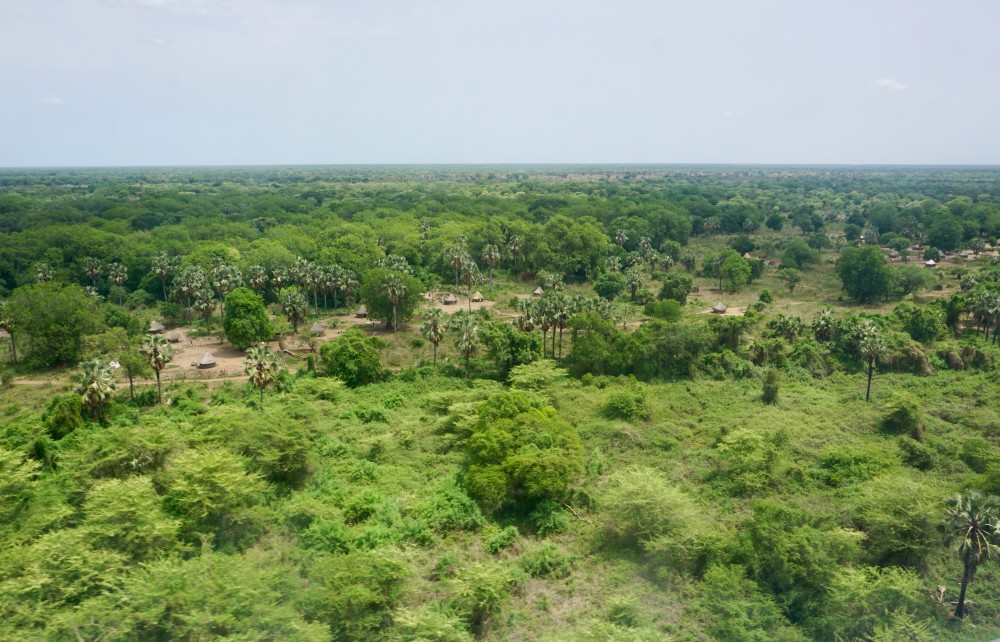 Udier, in the far northeast of the country, is outside government control. That means the isolated town is physically cut off by battle lines from trade with the rest of the country. The UNICEF operating base is in the playground of the town’s school. The building itself is roofless after damage in storms, with walls covered in graffiti showing charcoal drawings of soldiers and war.

The people are not only exhausted by the war, weakened by years without healthcare, but are also struggling to support new arrivals seeking shelter and safety displaced by the violence. “Our population almost doubled with people fleeing from fighting,” said Chuol Kang Wuol, director of aid operations for the local administration. “That has stretched us even more.”

Each mission is a microcosm of the crisis that South Sudan as a whole faces; staggering health needs, uncertain security, a lack of even the most basic infrastructure, and hunger at such extreme levels experts have warned of the potential to return to famine conditions declared in 2017. The missions are carried out in collaboration with WFP.

Sometimes as many as 30,000 people will come from deep in the bush in the hope of supplies, which WFP delivers by literally pushing supplies out the back of airplanes. Tonnes of grain sacks thunder down, while crates of more breakable cooking oil are dropped with parachutes attached.

But it takes more than food alone to build a life. Bringing so many people together provides a good opportunity to provide a rapid delivery of healthcare. “People come for the food,” said Ayangi. “When they come to register for that, then UNICEF offers support to those in need.”

Last year, UNICEF deployed teams on over 50 joint missions to locations across South Sudan. While the UN uses such operations in other conflict zones across the world, the South Sudan missions are unique in being the only ones totally reliant on helicopters.

The queues begin soon after dawn. The long lines last for hours, snaking out across the dirt airstrip, the only large open area for people to gather. This mission, targeting around 9,000 people, is only a medium-sized. 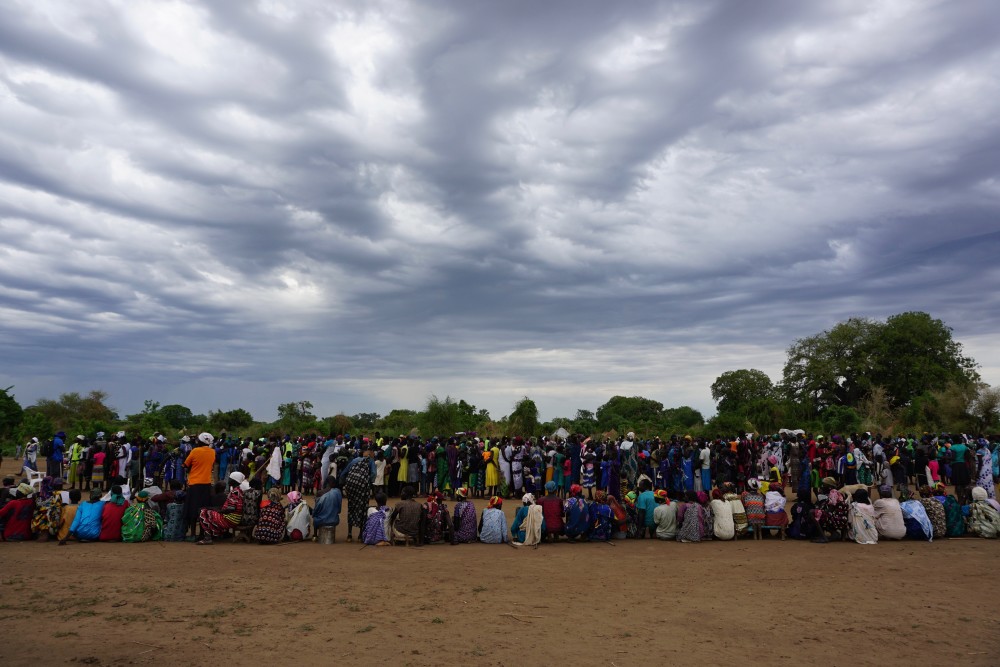 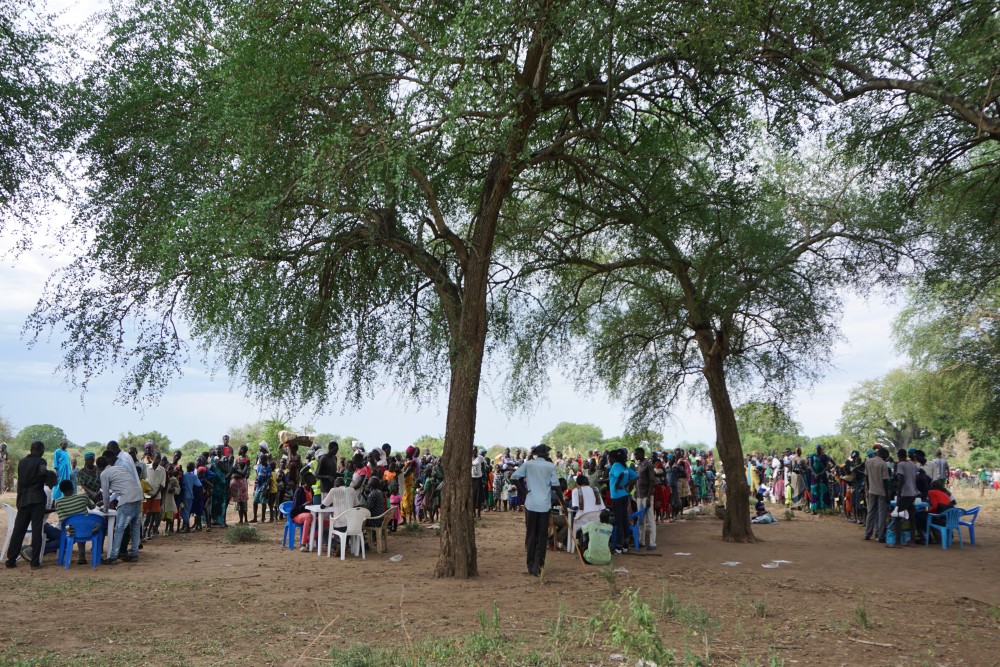 At the head of the queues, UNICEF experts with support from local health workers and volunteers work without break to assess the needs and provide what aid they can.

Some children have extended bellies and swollen ankles, while others have light brown hair, all warning indicators of possible malnutrition.

Nyaduel Kuoch, aged 25, holds her six-month-old daughter Much Kor as volunteers read off measurements on a sliding malnutrition assessment arm bands. “We are struggling from a lack of food,” Kuoch said. “There is no healthcare for my children.”

Children are given doses of de-worming pills, vitamin supplements and, if they are judged to be severely malnourished, packets of special formula food to bring them back up to a healthy weight. Elsewhere, lines of mothers and children wait for vaccines, or health checks from medics. 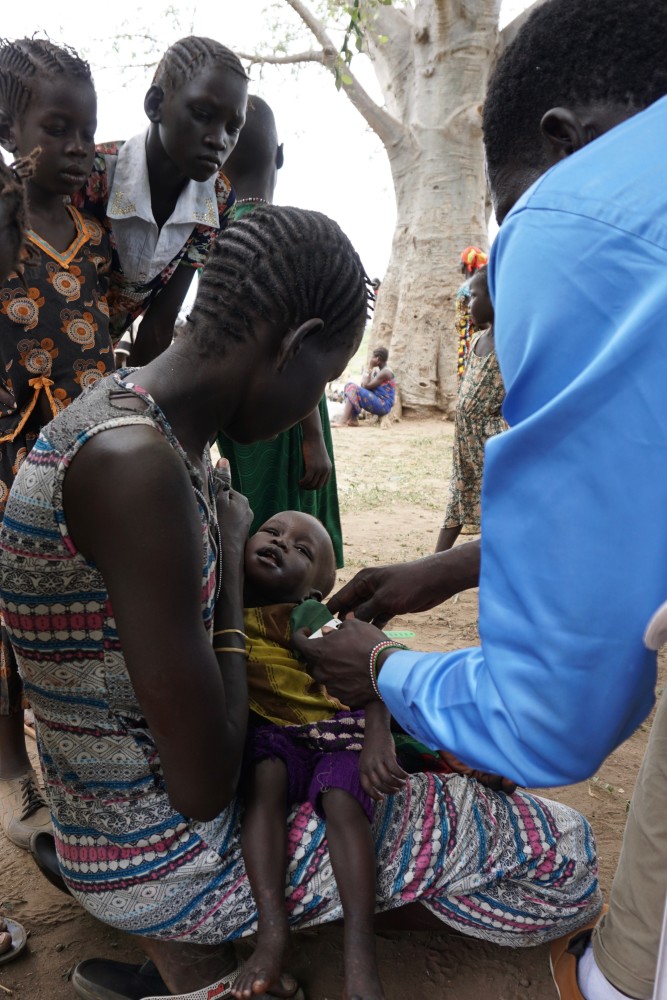 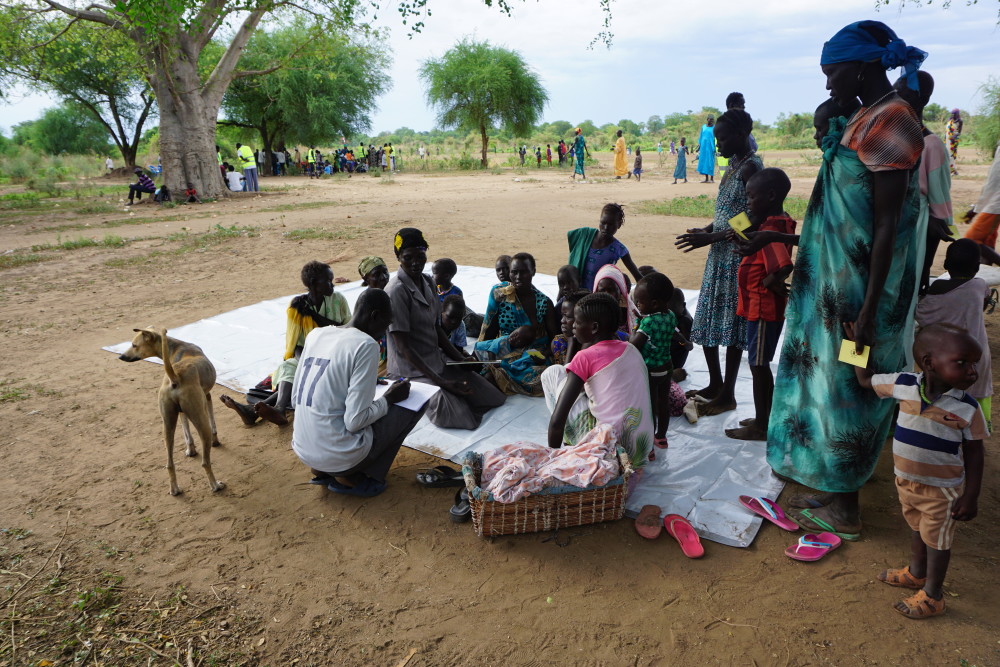 At another table, in the shade of a baobab tree, social workers take photographs of children who lost their parents in the chaos of war, and note down as many details as they can remember to help try and identify them. Some parents may have fled the country, or have died in the fighting.

“Many children have become separated from their relatives in the war,” said John Ruai, a child protection officer. “We’ll check with the national database if we can find any information to help reunite them with a family member.”

As the mission wraps up, basic supplies are handed out to mothers; clean water kits, including buckets and containers, purification tablets, soap, as well as mosquito nets to help curb malaria. 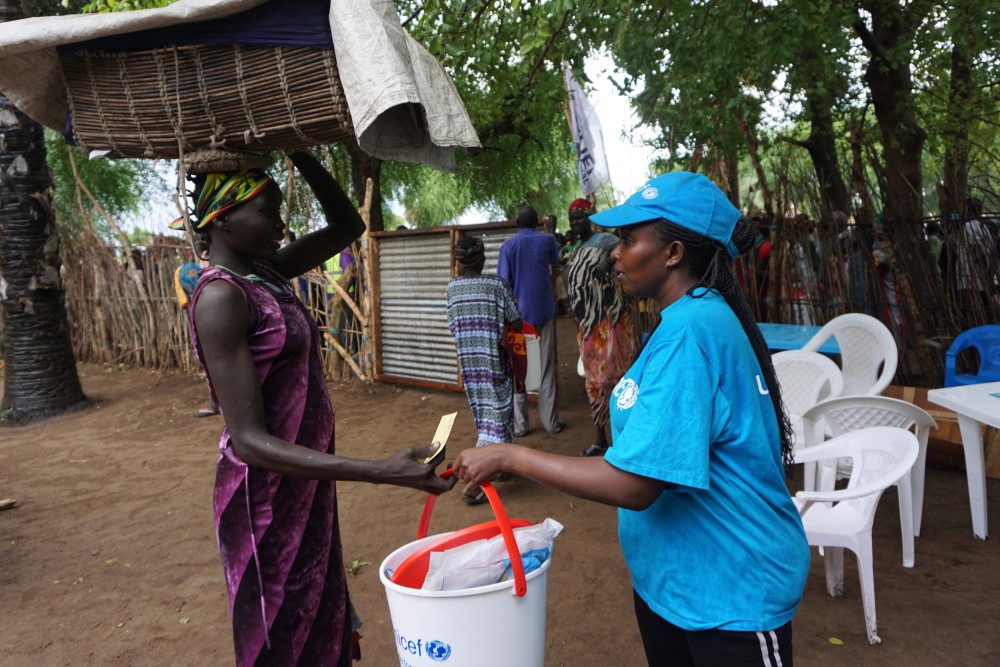 "We need more help,” said 26 year-old Nyalol Yaoch, holding her third child, nine-day old Nyalat Buay. “When will you be back?”

When the helicopter arrives to take the team out, a crowd from the community comes to say farewell. The helicopter whips up dust once again. As the helicopter shudders into the air, the last thing that can be seen through the storm are the lines of mothers, still standing and waving.

If you would like to donate to UNICEF's efforts in South Sudan, please visit the UNICEF South Sudan site.

It pays to help before disaster strikes

In observation of the International Day of Charity, we look at how DSV is working with the Danish Red Cross to provide disaster and emergency relief. With the help of DSV, Danish Red Cross is investing in and preparing aid for vulnerable communities before - and not after - they are hit by weather-related disasters. This saves both lives and money.