A number of VIPs participated in the event, including Doug Caldwell, Director, Fleet Management in Boeing Commercial Aviation Services, Thomas Woldbye, CEO of Copenhagen Airport and Rufus Gifford, US Ambassador in Denmark.

Actually, the warehouse has been in operation for some time – since November last year – making sure that all staff received special training in the area before the grand opening:

"Aviation spare parts are highly specialised units, and obviously it’s imperative to get it right. Everything must be in perfect working order," Tavs Larsen explains.

DSV won the contract in competition with numerous other logistics suppliers. With the extension of Boeing’s presence in support of its Goldcare airline services programme in the Scandinavian region last year, Boeing began a search for an exclusive spare parts supply partner through an open tender.

"DSV is an agile partner, moving and thinking fast to deliver solutions that fit the purpose. Our lines of command are quick, so we can act on the spot, and we have the necessary experience to get an operation up and running fast and efficiently," Tavs Larsen offers as an explanation for the win.

Almost six months into the cooperation, he is very happy that DSV has already passed the first audit of the new operation with flying colours, i.e. no remarks whatsoever.

The warehouse staff in Copenhagen has been involved in the training of both the 7 Swedish and 3 Norwegian DSV staff before their almost simultaneous opening on 16 and 1 March, respectively. Together, the three new workshops will be the perfect platform for Boeing’s Goldcare programme in Scandinavia. 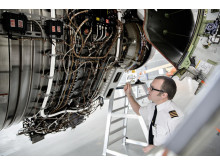