Looking back on a long and very successful career, Kurt K. Larsen’s first comment is “yes, it really is quite unbelievable, and, you know, it might never have happened, if the chips hadn’t fallen exactly right”.

Kurt K. Larsen is referring to the acquisition and successful integration of Samson Transport in 1997, which was DSV’s first leap into the international freight forwarding world and the foundation for all further acquisitions.

“But there never was a master plan, Leif [Tullberg, co-founder of DSV] and I just had this ability to spot an opportunity, a stepping stone, which led us on to the next and then the next”, Kurt emphasises.

Entangled with DSV from the beginning

In 1969, Kurt helped start up a small haulier business for the Frederiksen family: Rich. Frederiksen. In 1976, the company was split into a domestic and an international division and sold off to haulier Børge Jakobsen and Borup Autotransport, respectively.

The subcontracted hauliers previously employed in the domestic division of Rich. Frederiksen now had nowhere to go. They decided to go into business for themselves and were looking for a business manager. They asked Kurt, but he respectfully declined, because he had very limited experience with domestic transport of ‘dirt and gravel’.

While he’d been employed with K&E Spedition (1967-1969), however, he’d developed his skills within a new business area, full and part load, and this is where the potential really was, Kurt felt. So, he accepted a managing role in Borup Autotransport instead.

Meanwhile, “De Sammensluttede Vognmænd af 13-7-1976 A/S” (The Consolidated Hauliers) was founded with Leif Tullberg as their business manager. In the beginning, all DSV’s activities were managed from the Tullberg family’s kitchen.

As luck (or fate) would have it, DSV acquired Borup Autotransport in 1989 – and with it, Kurt K. Larsen. From now on, Kurt K. Larsen and Leif Tullberg were partners with an appetite for growing the business.

For the next eight years, Kurt and Leif consolidated and grew the business organically, and when the opportunity to buy Samson Transport presented itself, because DFDS (who had just acquired Dantransport) weren’t interested, they were very happy to get the chance. And that decision was a game changer:

“The fact that we were able to acquire Samson Transport, that was a turning point, that enabled us to subsequently acquire DFDS Dantransport (in 2000), and that is when DSV really took the first step into the big leagues. I firmly believed that we could successfully integrate and turn around Samson Transport. I saw great potential in in it, but it really was a make or break decision,” Kurt explains.

Necessity is the mother of invention

For Kurt, the object was never to make it big. After finishing school, he needed to find a job, and since his uncle was a freight forwarder that seemed like a perfectly good choice of career. By the time he was 25, he was married and had twins: “I had bills to pay, and as a freight forwarder, it was easy to get employment, so I stuck with that”.

You get the feeling that the acquisition and successful integration of Samson Transport would have actually been enough of a highpoint for Kurt K. Larsen. And he is very firm that the phenomenal development after Samson Transport was very much a team effort – and the result of the addition of new business areas besides road transport:

“If Leif and I had not been keen and open to add new skills to the company – with these acquisitions – it would still be just Leif and I with a desk each. Many people from a lot of different companies have been a part of the success that is DSV. Over time, they have become DSV, just like me, but each of us have added something more that has propelled us further”.

For Kurt, the motivation to do things a little better, every day, every week, every quarter was always there: “You have to remember that we started very small, so there was so much scope for development, but I never had an ambition, much less a plan, to be a part of the top management of an international corporation”.

Reaching for the sky – with some trepidation

“I told Palle Flackeberg (then Chairman of the DSV Board) and Leif when I returned to the office, thinking it was pretty ludicrous [red: DFDS Dantransport was 5-6 times the size of DSV]. But Leif was very enthusiastic, even if I was a little bit worried… Initially, we asked for a merger. At the same time, the national postal companies of Sweden, Norway and Denmark had also approached the major shareholder, the Lauritsen Foundation, to try to secure a deal. So we were sent home… But then, Leif and I went to Jan Erlund, the Chairman of the DFDS Dantransport Board, and we convinced him that we were the right buyers. He signed an agreement, and then things started to happen”.

During the negotiations with Jan Erlund, Kurt lost his nerve: “I was worried; it was a lot of money [DKK 6 billion], and I was tired. But after some sleep, and egged on by Leif who was the braver of the two of us, I was back in. But you know, it takes a lot of work and multiple rounds of negotiations to close a deal. Coincidence and luck as well as guts and perseverance play a huge part, and honestly, if things hadn’t happened exactly the way they did, I’d be telling a different story”. 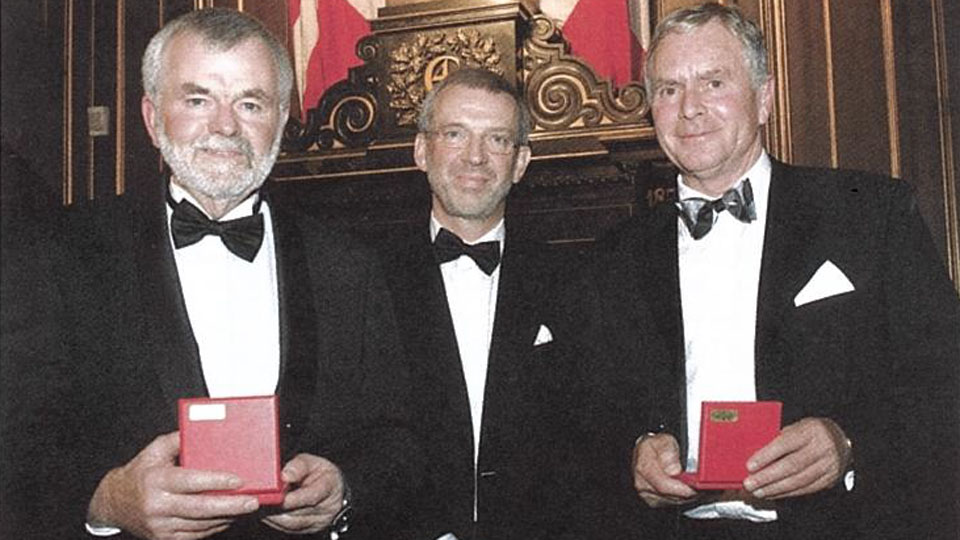 After the acquisition of DFDS Dantransport in 2000, DSV was catapulted to a whole different level. Kurt sums up his feelings of reverence for the task at hand with an anecdote from the early days of the integration:

“We sextupled our number of employees. There weren’t many of us from DSV, so naturally we moved in with them. I remember feeling quite humble and a little bit nervous, queuing in the canteen a few weeks after closing of the deal… I dropped my plate, it smashed into a million pieces and made quite a lot of noise. Someone from the back yelled out ‘it’s always the new ones’. I thought that was quite funny, and I was relieved. I took it as a sign of mutual respect”.

With Samson Transport and DFDS Dantransport successfully acquired and integrated, Kurt L. Larsen’s confidence grew. So, when the courtship with Frans Maas began, he didn’t falter, even though he was refused a great many times by the management before an agreement was finally reached in 2006.

“After DFDS Dantransport, we were making a lot of money, and we were confident. By now I knew that it was a long and winding road to land a deal, and I also knew the combination was a good idea. Deutsche Post (DHL) and Deutsche Bahn (DB Schenker) were dominating the European market, and we needed our own network to compete. It was simple really, DSV had the road freight volumes, Frans Maas had the network. I probably visited the corner office at Frans Maas a dozen times; ultimately, we made a deal with the majority shareholders, and that was it. The management went ballistic, but I can handle that sort of thing. And later in the evening, some of the guys from the office came down to support me. Ultimately, it was the right thing to do”.

Considering the role that M&A has played for DSV and in Kurt K. Larsen’s career, he talks mostly about the people he met and worked with when asked about his greatest achievements:

“The dynamic between Leif and me, that was special. Come to think of it, the dynamics and creativity that existed between so many of the people who joined DSV over the years was and is amazing. There’s a very special culture in DSV, and it’s extremely valuable. Leif and I, we came from nothing, I can tell you that. But we met some very talented people along our way who embraced this DSV DNA, and together, we were able to achieve even greater things: It truly has been a team effort – based very much on communal entrepreneurship, perseverance and loyalty. People generally work for DSV for a very long time, and great achievements take time and team effort”.

Kurt K. Larsen addressing the shareholders at the AGM in 2017

For Kurt, values and a strong work ethic are important on level with the need to make money. It’s something he has made a point of looking for and identifying when making decisions about management in DSV: “DSV has good karma; and it’s based on an open leadership style, on humility, the ability to take ownership and responsibility – and on loyalty”.

He feels very confident in the leadership of today’s DSV, which is part of the reason he is ready to retire and enjoy full control of his calendar. “All good things must come to an end, as they say, and I believe in the Executive Board as well as the Board of Directors [now fronted by Chairman Thomas Plenborg and Vice Chairman Jørgen Moller]; it’s a very, very strong team.

Future plans include spending more time at the summer houses in Tisvilde and Mallorca, playing tennis and enjoying time with his big family. He will of course hold on to his DSV shares and looks forward to keeping an eye on things from a distance.

Kurt at his home in Tuborg Havn, Hellerup (photo from the book Transport Giganten, Rasmussen & Aaagaard 2012)

Kurt wishes to thank all of the great and very talented people he has worked with over the years. “The list is so long, I really cannot mention them, and I’d probably forget someone important”. Special thanks go to the original A shareholders who always believed in and stood by Kurt and Leif, even when they weren’t sure of the plan or if there was one. Over the years, “their support was invaluable,” Kurt finishes.

Following the divestment of DSV Miljø (transport of building materials) in 2004, he became the CEO of DSV.

In 2008, he handed over the reins to Jens Bjørn Andersen and became Chairman of the DSV Board of Directors.

In the autumn of 2007, Kurt K. Larsen was awarded the Tietgen Foundation golden honorary medal, and in the spring of 2008, he received the Cross of the Order of the Dannebrog from the Queen of Denmark.

In his spare time, he plays tennis and enjoys family activities either at home in Hellerup, in the summer house in Tisvilde – or in Mallorca.

He and his wife, Vibeke, are art lovers and enjoy visiting exhibitions in the pursuit of the next collector’s item, typically something modern.

Empowerment is the key word

Understanding the culture of DSV

A history of mergers and acquisitions

DSV is a result of many mergers and acquisitions. Since DSV was founded in 1976, we have continuously acquired companies great and small, starting with small trucking companies and freight forwarders in the 1980’s.

Growing at a continuous and phenomenal rate

How Danish is DSV? And does DSV live up to modern expectations of diversity?

Another hat-trick for DSV: Best CEO, CFO and Chairman for the second year in a row

Kurt Larsen, Chairman of DSV’s Board of Directors, is the best Chairman in Denmark according to a new rating. He joins CEO Jens Bjørn Andersen and CFO Jens Lund as best in class, making it yet another triple win for DSV.

All points on the agenda of the extraordinary general meeting were approved. The company now has a new Group name, a new member of the board, and a new and a new Chairman, as now former Chairman Kurt Larsen stepped down.

​Focus is on successful integration of the Panalpina business and people

DSV Panalpina’s values are my values