It’s a first that we use a German title in our global newsroom. The reason is simple: There is no good word for “Zukunftsmacher” in English. “Zukunft” means future and a “Macher” is a doer, a maker. Put the two together, and you have someone who is shaping the future, the future of logistics that is: Mike Wilson. Mike, global head of Logistics and Manufacturing at Panalpina, was presented with the prestigious LEO Award by German trade publication DVZ at a gala event Friday evening in Hamburg. The DVZ explained why they see a “Zukunftsmacher” in Mike: “Wilson is someone who clearly says what everyone in the freight forwarding and logistics industry senses: We have to change radically.” On the occasion of the 70-year anniversary of the DVZ and the 10-year anniversary of the LEO Award, the DVZ added: “Wilson is getting the LEO award in the category business model because he consistently pushes this ‘disruption’ with Panalpina, including the implementation of 3D printing.”

Panalpina’s 3D printing services and academic research in this area fit in the bigger picture of Logistics Manufacturing Services (LMS), where the company plays a pioneering role in bringing manufacturing closer to demand in an effort to increase speed to market; a strategy known as distributed manufacturing. The company has started with LMS as early as 2013, first introducing it for the telecommunications industry in Brazil, then in Panama and Dubai. In his last blog post, Mike described what the new world of manufacturing looks like. In essence, distributed manufacturing means that products can be customized, personalized and finished as late as possible in the supply chain and as close as possible to the end customer or consumer. At Panalpina, and thanks to Mike, the future of manufacturing is already in the making.

The new world of manufacturing

​Manufacturing products in Asia and shipping them across the globe is no longer sustainable – neither from a competitive nor an environmental perspective. In the new world of manufacturing, take-make-dispose supply chains are morphing into distributed, circular and sustainable supply chains. The drivers behind this development are product modularization, the makerspace movement, and 3D printing. 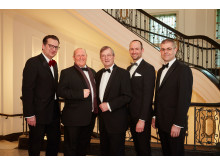 LEO Award 2017, Hamburg, Germany: Mike Wilson (second from left) with the other two LEO Award winners to the right.