Adding the Colombia hub to its global LCL network infrastructure creates a unique offering in the market and further strengthens Panalpina’s position as one of the leading LCL service providers in Latin America, which has long been a focus area for the global freight forwarder.

“According to global economic projections, growth is expected to reach 1.7 percent in 2018 and 2.3 percent in 2019 in Latin America and the Caribbean,” says Clas Thorell, Panalpina’s global head of Ocean Freight LCL. “We want to be part of the future of this emerging market by offering financially viable solutions to customers who source or distribute in these markets.” The Colombia hub offers 20 inbound connections and 18 outbound connections through Pantainer Express Line, allowing smaller shipments to move by ocean with consistent and regular departures.

Stefan Karlen, Panalpina CEO adds: “This is a long-term investment in the global supply chain that we believe will be beneficial for our customers and Panalpina, today and well into the future. Now, our Colombia hub reduces transhipment time and allows faster access to markets. The future opportunities it opens up are real possibilities for our customers to pursue investments in the region and that is what we are looking to achieve – solutions that foster growth for Panalpina, our customers and the communities where we operate.”

Panalpina’s inbound services operate weekly into the Port of Cartagena from Belgium, France, Germany, Italy, and Spain in Europe; Miami and New York in the United States; Altamira and Veracruz in Mexico; Costa Rica, El Salvador, Guatemala, Honduras and Nicaragua in Central America; the Dominican Republic in the Caribbean; Argentina, Brazil, Chile and Peru in South America; and South Korea in Asia.

Outbound services operate weekly from the Port of Cartagena to the Netherlands in Europe; New York in the United States; Veracruz in Mexico; Costa Rica, El Salvador, Guatemala, Honduras, Nicaragua and Panama in Central America; Curacao, the Dominican Republic, Jamaica, as well as Trinidad and Tobago in the Caribbean; Argentina, Brazil, Chile, and Peru in South America; and South Korea in Asia.

Panalpina is one of the world’s leading LCL service providers. LCL offers the possibility of consolidating multiple consignments from multiple customers in one Full Container Load (FCL). Customers can ship low volumes without having the cost commitments of a full container. Hence, LCL gives customers with lower volume shipments access to the economies of scale in ocean freight that are normally restricted to full container movements. Panalpina’s global LCL network consists of numerous direct LCL services and strategically located hubs. Customers benefit from an optimized logistics spend, more flexibility and seamless door-to-door services with the highest level of schedule integrity and reliability in transit times.

​Panalpina Bogotá has been certified according to WHO Good Distribution Practice (GDP), an important international standard for the proper distribution of medicinal products for human use. The business unit in Bogotá is Panalpina's 31st location globally to obtain such an important certification for the healthcare industry. 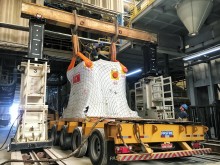 Adaptation and inclusion can create something new and wonderful, from exports to customer experience. Peru began exporting asparagus in 1987. Today, it is one of the world’s leading exporters of the non-native crop and home to Panalpina’s first female managing director in the Americas.

Perishables and flavors from China to Peru and back

The perishables trade between China and Peru has a long history of cultural exchange dating back to the 19th century. And this trade is expected to increase in line with China’s growing appetite for fresh produce. Year-to-date and compared to the entire year of 2017, Panalpina alone has already tripled perishables exports from Peru to China.