2017 has been an exceptional year for air freight. The market has developed a new dynamic characterized by tight transport capacity and sustained high freight rates. Summer was anything but the usual calm and Panalpina’s early prediction of a very busy peak season in the last quarter turned out to be correct. In October, Panalpina recorded its highest ever monthly Air Freight volumes, a record that was beaten only one month later in November, as the latest figures show.

Trade journalists Stuart Todd turned the conversation with Kuehner into three articles that were published on Lloyd’s Loading List in late November and early December:

E-commerce ‘a challenge and opportunity for air freight’ (December 4, 2017)

“E-commerce is certainly swelling peak season demand this year and accommodating it into airborne trade flows, week in week out, is one of the major challenges facing the industry today.”

“There’s no reason why the current challenges will go away. I think the air cargo community − shippers, airlines, forwarders − have to get used to a market environment where capacity is scarce and at its limit, at least for several more weeks, probably months.”

“The available aircraft are there and being deployed and flying record hours to meet demand. But the entire system is reaching its ‘natural’ limits. Demand is overwhelming right now and freighter and belly capacity is being thrown in from all sides and aircraft, including our own, are clocking up extremely high flying hours.”

Kuehner also brought up the unsatisfactory situation at Europe’s airports, where ground handling infrastructure is “bursting at the seams”, especially in Frankfurt, London Heathrow and Luxembourg.

“At least there seem to be no new strikes looming in Frankfurt,” says Kuehner. As for the peak season, there is no sign of a slow-down as yet. Between Asia and Europe, and between Asia and the Americas, demand for air freight is still very high in both directions. Outbound Europe to Asia and the Americas in particular, demand is enormously high and there is hardly any capacity left. The situation is similar for flights to Latin America from Asia, where capacity is almost not available anymore. “On a first-come, first-served basis, we still offer express solutions, of course. The only route where things have slowed down a little is on the Transpacific, from Asia to the US, but it is too early to tell. In any case, we remain alert and agile, just as we have all year through,” says Kuehner.

The skies are running hot

​With the air freight peak season picking up, the skies are getting busier by the hour. Already in September, Panalpina’s global head of Air Freight, Lucas Kuehner, in an interview singled out HKG to LAX as one key lane where capacity would get even tighter. One month later, the scenario is a reality: “We are running at full capacity but will always find a solution for our customers."

The summer period is usually a calmer time for air freight – but not this year. The strong market development with high volumes will likely continue for the rest of the year, further widening the gap between demand and supply. “The challenges are manifold, but we haven taken action to secure extra capacities to meet the growing demand,” says Marc van Dommele, regional head of Air Freight Europe.

E-commerce is the fastest growing sector driving global air freight volumes. Panalpina's global head of Air Freight, Lucas Kuehner, explains Panalpina's approach to air freight for e-commerce, and what it takes to be successful in that business where nothing can go wrong - while making sure that regular air freight customers do not lose out on capacity come the peak season. 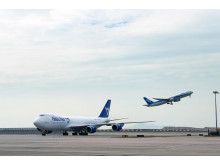