It was a move to remember for life. Willi Tobler, Panalpina’s global head of transport engineering for Energy and Project Solutions talks in more detail about the challenges he and his team faced in March when a 76 ton subsea tree for an oil and gas customer had to be loaded onto an Antonov-124 in Malaysia. The tree’s final destination was on the seabed of a gas field located off the south east coast of Trinidad.

Willi, you called the move to Trinidad and Tobago the most complex air freight related assignment of your 27-year career with Panalpina. What made it so complex?

In an operation like this, a lot of parties are involved: the customer, the customer’s subcontractors Panalpina, our subcontractors, authorities and airports. That in itself is a complex exercise, but with this particular mission, we had to overcome unexpected technical challenges on top and improvise as things developed. We had to use all our engineering and organizational skills as well as our perseverance for this.

Things did not always go exactly according to plan?

Not all of them. This is not unusual per se, but this mission really put us and everyone else to the test. We worked out a detailed time schedule for the entire mission which stretched over two months Timing was very tight, which meant there was almost no possibility to make a contingency plan in case something didn’t work out as hoped, even more so because the mission also stretched over Chinese New Year. We prepared an operations manual of more than 100 pages with technical drawings, 3D illustrations, and photos for each step of the transport and aircraft loading in Malaysia. In hindsight, this detailed manual proved to be invaluable. It facilitated the coordination and often very technical discussions between the different parties when we had to solve multiple problems on the go and under immense time pressure.

What was the biggest challenge?

Well, it all started with the steel frame that had to be used for the transport of the subsea tree, really.

Why did you even need a frame?

The main purpose of such a frame is to spread the cargo’s weight evenly over the aircraft’s floor. The tree itself had a static weight of 76 tons, but since this cargo was airlifted, dynamic forces of up to 3G had to be considered. The frame for this transport, designed by the Antonov Design Bureau, consisted of almost 1,000 individual parts and had to be manufactured in only six weeks by one of the customer’s approved service providers in Malaysia. It is also important to know that in the case of the An-124, dense cargo like the subsea tree never touches the aircraft’s floor, and nor does the frame. The cargo sits on the frame and the frame sits on the Antonov’s skidding system, which is used to move heavy cargo in and out of the aircraft.

What was the challenge with the frame?

It deflected. In lay terms you could say it deformed in the vertical axis. Think of the frame as a suspension bridge across a ravine. The two ends of the bridge sit on rocks, which represent the skidding system. The deflection meant that the bridge sagged and came closer to the bottom of the ravine, almost touching it. But you need space between the bridge and the ground. To make things more complicated, the frame also twisted around the horizontal axis. This is called torsion. Because of the deflection and torsion, the entire package consisting of the cargo and frame ended up being higher than planned. Getting the subsea tree into the Antonov was always going to be very tight, but suddenly we were left with even less room for maneuvering inside the aircraft.

Yes, we had to make several modifications to the frame to reduce the deflection and torsion and the overall height of the package. It involved welding and cutting with very limited means on site. Each and every modification had to be reviewed, calculated and approved by the Antonov Design Bureau. But that was not the end of it. There was another element in all of this, a very crucial piece that complicated things further: the stump.

Tell us more about the stump.

The stump was a special requirement by the manufacturer of the subsea tree. It was bolted down in the middle of the frame and the subsea tree then sat on the stump. So in actual fact, the cargo did not even touch the frame. The purpose of the stump was to accommodate and transfer all the weight and respective dynamic forces into the frame. Preventing any direct contact between the subsea tree and the frame also meant better protection of the highly sensitive valves and sensors inside the tree. The tricky part was securing the tree on the stump. The integrated hydraulic locking mechanism of the tree was used to achieve this difficult task. The plan was to apply 300 psi of pressure to achieve full lock between the stump and the tree. It was not enough, however, and with the permission of the customer and the tree manufacturer, we increased the pressure to almost the same pressure that was intended for the final installation of the tree on the seabed.

Every transport of this dimension is unique and comes with its own set of challenges. A lot can be calculated and planned for in advance using modern software, but you need to be prepared to jump in and accommodate last minute changes if required. This is the kind of mission where we as transport engineers can excel and draw from years of experience.

In summary, what makes heavy-lift and out-of-gauge transports by air so challenging?

Well, first of all, whenever possible you try not to fly heavy or out-sized cargo, of course. Out-of-gauge air freight shipments normally come with increased time pressure and that’s what makes them challenging. And as this mission neatly showed, moving cargo in an aircraft comes with the obvious weight and space limitations. The high acceleration forces are another important differentiator and they even vary between the different aircraft types and respective load locations on the plane.

So all in all it was a mission with challenges on multiple fronts?

Yes, indeed. Let’s also not forget: Getting the empty 30 ton main frame including stump from the fabrication yard to the plant where the subsea tree had been manufactured constituted a fully-fledged overland heavy-haulage operation, because of the frame’s size. And so did each loaded 40 kilometer move between the plant where we modified the main frame and Senai International Airport. We had to make this journey three times instead of only once. It was definitely a mission to remember. In the end, thanks to the professionalism and commitment of everyone involved, we managed to load the subsea tree onto the Antonov, and send it safely and on time to Trinidad. 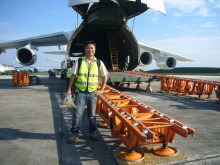 On the fourth loading attempt everything finally came into place and gone were the worry lines in the faces of everyone involved: The Christmas tree for the Caribbean was correctly positioned inside the aircraft. It had been inched past the most critical section right under the cockpit of the An-124, where the maximum vertical clearance is 4400 mm. Every single one of these millimeters was needed. 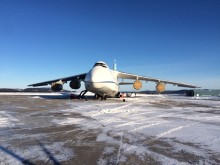 With the 76 ton subsea tree successfully loaded and secured in the hold beneath him, loadmaster Yrii Rudko’s job was done for now. Sitting in the cabin at the back of the An-124, seat belt fastened, he could feel how 400 tons of mighty flying equipment and cargo accelerated down runway 34 at Senai International Airport in Malaysia. This is part III of Panalpina's "Christmas tree" story. 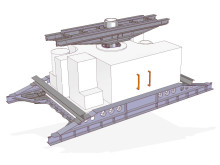 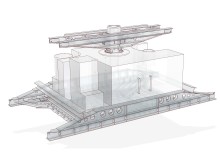 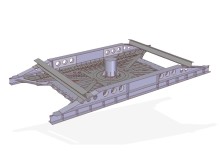 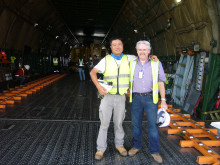 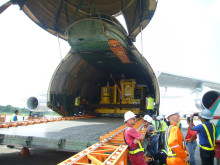