With the capacity to store up to 800,000 barrels of oil, the FPSO Glen Lyon is one of the biggest oil and gas production units ever made. The Floating Production, Storage and Offloading unit was towed from South Korea to the North Sea in 2016 – assisted by Panalpina, who provided material management, husbandry and ship agency services during the tow.

But what is it like to work and live on a vessel that takes five minutes to walk from one end to the other? There were 140-160 crew members representing 18 different nationalities on board, including a core operations crew that managed systems such as lighting, ventilation, power, fire pumps, ballast systems, cargo replenishment equipment, and mechanical systems. There was also catering staff who looked after food service, cabin cleaning, and laundry, and a deck team, responsible for maintaining tow equipment and marine services. The crew worked in rotation, 24 hours a day throughout the entire journey. It was led by captain Michael Elson, who has worked for BP for the last 16 years, and been captain on four other FPSO projects. “Adjusting to the size of the FPSO does happen quickly, but as it was so big, I didn’t visit every part of it every day,” says the captain, who was responsible for the entire crew, the vessel and the environment during the voyage. “We did have helpful extras like color-coded green, yellow, purple and blue decks to help us find our way around easily.”

The Glen Lyon was towed to its final mooring destination in the Schiehallion oil field by three tug boats. The tug master of the tug boats was responsible for the safe navigation of the Glen Lyon. The captain approved the route of passage in advance but unusually, he was not in charge of navigation during the voyage. “It is quite strange for the captain not to navigate the vessel, but we have to remember the Glen Lyon is technically not a ship. It has no means of propulsion of its own, because once it reaches its destination, it remains in place anchored to the seabed,” explains Elson. “As the Glen Lyon was being towed, the rules were different. Day-to-day navigation was up to the tug master while I worked closely with the offshore installation manager to ensure the safety of our crew, vessel and environment, timely departure from each port, and regulatory compliance throughout the tow.”

An average day on the Glen Lyon saw the captain, offshore installation manager and senior members of the operations and construction crews meeting every morning to discuss the vessel’s progress. “Daily targets were set and discussed at the management meeting. This included a target of 100% for safety observations for each week by all personnel, which was achieved,” says captain Elson. The team then spoke to their onshore colleagues to give them a daily progress report. A satellite connection also enabled the crew to stay in touch with loved ones back home during free time.

Free time could also be spent at the gym or 40-seater cinema, which doubled as a function room for town halls and safety briefings. Brand-new facilities and a catering team of 13 helped to keep the busy crew well-fed and comfortable on board, and good weather was taken advantage of too: “On Saturdays, especially when we travelled through the Indian Ocean, we would gather up on the helideck and have a BBQ,” says Elson.

But perhaps the most memorable event for many crew on board was taking part in a notorious seafaring ritual, the “crossing the line” ceremony. For a large majority, it was their first time on board an FPSO. It was also their first time crossing the equator, which the FPSO did twice during its voyage, each time celebrated with a compulsory “crossing the line” ceremony. Crew members who had never crossed the equator before had to get permission from “King Neptune” (a role acted by the captain) before being inducted into the “Kingdom of Neptune” in a ceremony that involved dressing crew up in fancy dress and covering them in food waste. Once inducted, they received a certificate and were washed down with sea water. “It was all in the spirit of good-natured fun,” laughs Elson.

When the Glen Lyon reached the final destination in the Schiehallion oil field, the captain bid farewell to his home for the past several months and departed the vessel. As soon as the Glen Lyon was anchored to the seabed with a 12,000 ton turret mooring system – consisting of 20 mooring lines, each measuring 1.5 kilometers in length – the FPSO did not need or legally require a captain anymore. The Glen Lyon is now producing approximately 130,000 barrels of oil and 220 million of standard cubic feet of gas daily.

Tip: Watch BP's video to understand how the Glen Lyon is tied into a massive control and production system (recommended: watch from 4'30" onwards). 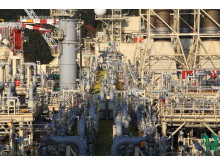 Pipes and valves on the d... 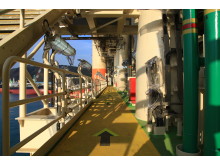 A five-minute walk from e...