New rules on ship emissions are coming into force next year. From 2020, the sulfur content of bunker fuels will be reduced to 0.5 percent, compared to 3.5 percent now in most parts of the world. As the January 1, 2020 deadline for adherence to the low sulfur limit looms, ship owners, operators and carriers have three options to comply with #IMO2020:

In May, the Clean Shipping Alliance 2020 (CSA 2020), the industry association for scrubber manufacturers and users, started a campaign to convince port authorities not to ban the use of open-loop scrubbers within their waters. CSA 2020 has secured written no-objection letters from 20 seaports in Europe, the Americas, Asia and Australia.

Clearly not one of the CSA signatories is the Maritime and Port Authority of Singapore, which earlier banned the use of open-loop scrubbers in its waters, and recently classified residues from scrubber operations as “toxic industrial waste (TIW)”. Under Singapore’s Environmental Public Health Regulations, toxic waste must be handled by a licensed collector. This means that ships wishing to dispose their scrubber residues in Singapore will have to hire a licensed company to collect and dispose the waste material.

The International Maritime Organization (IMO) Sub-Committee on Pollution Prevention and Response (PPR) is already undertaking a review of the 2015 guidelines on scrubbers, also known as exhaust gas cleaning systems (EGCS). The guidelines cover the testing, survey, certification and verification of scrubbers, as well as wastewater discharge standards, and are to be revised by 2020.

A recent IMO guidance mentions that as of March 1, 2020, the carriage of non-compliant fuel oil used by ships, will be prohibited. Would this in effect stop the booming scrubber retrofit market and instead push the ship newbuild industry and refiners to support compliant fuels?

Apart from scrubbers, the ocean freight industry is weighing compliance options and looking into alternative sources of fuel. One alternative is liquefied natural gas (LNG) or clean gas, which leads to negligible sulfur emissions when ignited. Despite project delays and budget overruns, the wave of LNG investments continues, but the LNG bunkering network remains underdeveloped. The other alternative is, of course, low-sulfur fuel. Here, there are concerns over high fuel costs and fuel availability, in the right quality in time.

Fuel quality is a burning challenge that has implications for global supply chains, both from a cost and disruptions perspective.

There is currently little standardization on a global basis regarding the composition and quality of low-sulfur fuels. The lack of fuel standardization could lead to compatibility and stability issues, because new fuel blends or fuel types can impact a ship’s machinery systems.

Back in March 2018, over 100 ships were affected by blended marine fuels that were bunkered in Houston, Panama and Singapore, and moving on to China. Vessels suffered mechanical issues ranging from clogged pipes and filters to engine breakdown and power loss, leading to operation disruptions and insurance claims worth millions of dollars. As Dr. David Atkinson, principal chemist at emissions monitoring specialists Parker Kittiwake puts it: “Without proper checks in place, the sharp rise in bunker-quality issues seen in recent months could be an indicator of what may lie ahead when the global sulfur cap comes into effect.”

The problem is that the main and auxiliary engines of today’s ships may originally have been designed to run on fuels that differ from newer fuels that comply with the sulfur cap. As fuel supply system provider Auramarine notes, ships with different engines and bunkers have the option of switching to low-sulfur fuel in port. However, if different fuels are blended, the resulting bunker fuels may not be tested or evaluated properly. These factors point to an increase in demand (and related costs) for onboard fuel compatibility testing in the run-up to IMO2020.

IMO2020: What can Panalpina do for its Ocean Freight customers?

The regulators have laid out the rules, but the path for ship owners, operators and carriers to complying with the low sulfur limit remains rocky. As we pointed out before, they will pass on higher costs related to IMO2020 to cargo owners, third-party logistics providers and end-consumers. These costs will be implemented sooner rather than later. Panalpina expects implementation already at the end of Q3 or beginning of Q4. And there is a considerable potential for supply chain disruptions due to delays in fuel supply, denied port calls, retrofitting or downtime of ships. Expect choppy waves in the months leading up to and stretching beyond the IMO2020 sulfur cap.

As the shipping industry grapples with the impact of the new sulfur regulation, Panalpina keeps monitoring developments and is ready to support Ocean Freight customers in dealing with higher costs and potential supply chain disruptions. Panalpina’s Ocean Freight procurement experts will make sure to cut the best and fairest deals for our customers.

Earlier this year, we introduced a globally competitive bunker mechanism that increases visibility for customers and eases the transition towards new fuel types to comply with the low sulfur limit. We update our bunker tariffs for all major trade lanes at the latest two weeks before the beginning of each quarter. The new bunker tariffs, effective as of July 1, 2019, have just been published.

Panalpina is ready to support Ocean Freight customers in dealing with higher costs and potential disruptions as a result of the lower sulfur limits. Already this year, cargo owners will feel the impact of new rules on ship emissions coming into force. From 2020, the sulfur content of bunker fuels will be reduced to 0.5 percent, compared to 3.5 percent now in most parts of the world.

Be sulfur-smart: The maritime industry is weighing its options for complying with the new rules on ship emissions

The sulfur limit that takes effect in 2020 has led to a scramble for compliance options, as the industry grapples with the impact of increased costs and potential supply chain disruptions. Ship owners and operators are hedging their bets on alternative fuels, but all options require significant investments that will put pressure on shipping rates. Our blog post navigates the turning tides.

Be sulfur-smart: Get behind the real issues in the debate over scrubbers

With the new sulfur limit coming into force in 2020, ship owners and operators are looking to comply with the regulation, and a debate has ensued over the use of scrubbers. What are open-loop and closed-loop scrubbers? How harmful are scrubbers to the environment? We look at what’s behind the debate. 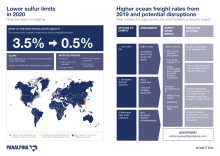 New rules on ship emissions that are coming into force on January 1, 2020, are already starting to have an impact on the ocean freight industry. Cargo owners are affected in two major ways: increased cost and potential supply chain disruptions. Panalpina is here to support customers in the transition. Download the graphic here.