This is a reissue of the original interview by George Sarpong with Ralf Morawietz which was published on October 6, 2016, in the Swiss IT trade publication Netzwoche.

Ralf Morawietz is Chief Information Officer at Panalpina, one of the world's biggest freight forwarding and logistics companies. Morawietz consistently champions the integration of IT and business and it's paying off.

You began working at Panalpina last autumn. In what sort of shape did you find the company's IT systems?

Ralf Morawietz: I found the corporate IT systems to be very stable. There were no escalations that could have brought the company to a standstill. Our "run" organization, which handles operations internally, was resolving problems promptly.

Were there difficulties as well?

The coordination between IT and business was underdeveloped and IT not nearly close enough to the business.

How do you mean?

In some areas there were no dedicated contacts on the business side. For instance, there were no special liaisons in IT for our core Air and Ocean Freight products. Ultimately, IT in companies like ours has to be structured in a completely different way than it has been before. We are no longer a department that only handles infrastructure, but a fundamental factor in the company's business success. We have to know where the problems lie, how we can support operations and where we can offer innovative IT solutions to drive the business forward.

How are things looking at Panalpina today?

The gap between IT and business still exists to some extent, but we are in the process of making it smaller. To accomplish this we have reorganized the management layers in IT. Since we restructured in May, we've been working closely with internal customers on the business side, developing and providing the solutions they need.

What sort of feedback have you received?

The response from IT, and especially from the business side, has been nothing but positive so far. Everyone has noticed that there's been a new momentum since we restructured, that projects have a new quality. This is extremely important to me because I don't just work for Panalpina as Chief Information Officer; I'm also a member of the Executive Board who was entrusted with IT.

Why wasn't that working before?

This was a strategy shift that was instigated by my arrival, away from outsourcing toward a balanced strategy that ultimately encompasses both outsourcing of commodity IT services and insourcing of core competencies. It lets us bring expertise that we had given up back into the company so that we can provide real-time data to our internal customers.

How do you do that?

As far as I'm concerned, there’s no separation between IT and business, but many companies still keep it that way. I see myself very clearly as part of the business organization. After all, as a member of the executive board, I share responsibility for the entire company. I have to make management decisions, and I can't do that if I'm only focused on IT. It's also against my nature. That's why it’s so important to me to close this artificial gap between IT and business and bring the two back together.

Panalpina is in the midst of implementing a major SAP project. What does the company hope this project will achieve?

A few years ago we decided to implement SAP products to standardize our core Air and Ocean Freight production systems on SAP TM. We launched the project in 2008 and have rolled it out in two big pushes. With SAP TM version 8.5, we released the Ocean Freight functions, while the Air Freight functions were added with version 9.1. To do so we modified the SAP system to meet our own requirements.

In the past, SAP TM was used mainly by consignors at the planning level. The module we use today was primarily developed together with Panalpina. We are currently the world's biggest user of this SAP TM product, so in that sense Panalpina is also a pioneer in the field.

What were the biggest hurdles while you were preparing for the roll-out?

First, it was not a finished product that had had to hold its own in the market for 20 years with all the maturity and robustness that would imply. Besides that, SAP brings a certain degree of rigidity that can be a challenge for us at Panalpina. SAP has a very process-oriented approach with a strong focus on data quality. That in turn made it necessary to advance our iterative change management process. On the one hand the software had to stabilize, on the other we had to train our staff to work with the system as efficiently as possible.

How does that show in day-to-day work?

You can sense it in the way that switching over to SAP TM 9.1 was easier for the Ocean Freight staff who had already been working with version 8.5 than it was for the people who were encountering 9.1 for the first time.

How did the launch go?

We recently went live in our pilot countries, Switzerland and Singapore. The feedback from users in the pilot countries has been consistently positive. What's more, our customers hardly noticed the change, which was a good thing. Now we're preparing for rolling the system out in the next group of countries.

And the change process?

The change process is going well thanks to our early focus on the users. It's important in this kind of project to gather broad-based experience, pause for a moment to reflect, and incorporate what we've learned into the system and processes before continuing. This continuous improvement, the organization's ability to keep questioning itself, is important.

How important is IT for a logistics services provider?

That sounds like a simple question, but it's very difficult to answer.

Our industry is one where it's possible to operate simply without elaborate IT support. All that two people on different continents need to start sending containers by ocean freight is their PCs and e-mail. By the time you reach our scale, however, it is impossible to operate in the freight forwarding and logistics business without extensive IT support.

What exactly do you mean by that?

We are a data hub. We suck up information, pass it on and use our IT systems to ensure the information flow is as efficient as possible. By doing so, we want to make sure our staff in different countries get the information that's relevant for them at the right time. IT is essential for that, because of our customers, but also because of the speed we need to deliver information to our partners, receive it from them and forward it to our customers.

You emphasize the importance of melding business with IT. To what extent is that owing to digitalization?

It is completely unrelated to the digitalization trend.

I've been in the logistics industry since 2002. For all that time, I’ve been dogged by the issue of compiling and presenting data in real time. The issue has not changed in all those years. That is what is sobering about the whole matter: we've been talking about old wine in new bottles the whole time. The issue of digitalization has been keeping IT specialists busy for 10 to 15 years. What has changed is the technology. Bandwidths have improved, systems have become smaller, and availabilities are better. But none of that makes the data streams better.

Because the incoming information flow has to be structured, analyzed and understood. I doubt that many companies have the degree of maturity needed to handle this information properly. Two years ago big data was the hot trend. Without big data, companies might as well shut down, was the general thrust. Today many companies have gigantic big data systems, but hardly anyone who knows what to do with them. I don't think we're doing ourselves any favors by chasing a trend while forgetting to do the things we really should be doing: namely, building a solid platform, creating understanding, bringing the right people together, and finally extracting information out of the data we have.

Which is more important, the flow of goods or of information?

We own neither ships nor aircraft. As a result, we are regarded as "asset-light” by the industry. We are essentially an information and service broker. We purchase services and use them to assemble a portfolio for each of our customers. This can include collecting, consolidating, forwarding and delivering goods. Customs clearance and other value-added logistics services up to and including final assembly of semi-finished goods may also be part of the package. The main issue for customers is having the right information about their product in the supply chain at the right time. The key word is visibility. This makes it possible to take immediate action in exceptional situations.

Could you give us an example?

If an oil company has to wait for a drill pipe, the delay can quickly become expensive. So if there are likely to be hold-ups in delivery to an offshore drilling platform, the company will want to know straight away. Prompt intervention can then prevent delays and avoid the associated high costs. In this respect, information flow can be more important and more valuable than the actual flow of goods already today.

How do you accomplish that?

The idea is to pick out the information from the stream that is important for making prompt action possible. The more information customers get, the more important it is for them to recognize exceptions from the rule so that the right systems and contact people can be brought into play immediately.

And that brings us back to big data.

We are evaluating where big data can help us, but first we have to figure out what specific business problem we're trying to solve so we can show that the available analytical tools can actually deliver an economic benefit for the company.

Ralf Morawietz (49) joined Panalpina as Chief Information Officer in mid-October last year. Here he oversees the entire systems landscape consisting of nearly 18,000 laptops, servers, smartphones and printers. His career began at NCR in 1988. In 2002 he moved from Teradata to a management role at Deutsche Post. From 2010 to 2015 he worked at Kuehne + Nagel in Hamburg, where he led application development and served as a member of the IT management team. Approachable, Panalpina's new CIO is easily recognized by his clothing. He prefers black and adamantly refuses to wear a tie. After nearly a year at Panalpina, he values the corporate culture he has found here: "It is characterized by respect and collegiality", he says. Born near Düsseldorf, Morawietz is married and has two children. In his spare time he enjoys playing sports and board games, and reading books — of the printed variety. 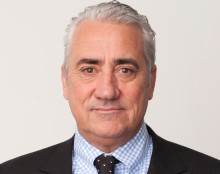 In the heart of Portugal’s capital, Lisbon, Panalpina has opened a new IT Center of Excellence where a growing number of highly qualified software engineers and other IT specialists are developing business critical IT solutions for customers of the international freight forwarding and logistics company.

The world's logistics firms are in the midst of a digital transformation. But this is nothing new, says Panalpina's Chief Information Officer, Ralf Morawietz, in an interview with Swiss publication IT-Markt. He would like to see more common sense and composure. 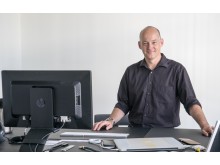