Ensuring the successful voyage of a 270 meter long and 52 meter wide FPSO across the world requires a great deal of organization and monitoring, especially when the FPSO needs to be a fully functioning workplace along the way. Last year, Panalpina assisted BP with the tow of the FPSO Glen Lyon from South Korea to the North Sea by taking charge of a number of responsibilities under the scope of material management, husbandry, ship agency services and the emergency response plan.

Between December 2015 and June 2016 the vessel travelled 15,600 nautical miles in total, travelling at an average speed of 6.4 knots first from South Korea to Norway and then onwards to its permanent location west of the Shetland Islands.

In order to meet the scheduled time allowance for the entire journey, turnaround time in the ports of Singapore, Port Louis in Mauritius, Walvis Bay in Namibia, and Las Palmas, Canary Islands, was a mere 72 hours. This meant a race against time for Panalpina’s teams to complete all material and personnel requirements at each port, and ensure that all crew members on board were catered for and able to work throughout the duration of the voyage to the North Sea.

Panalpina provided material management services which included the shipment of freight by sea, air and road to the designated ports, customs clearance, shipment of goods to and from the FPSO and temporary storage at each destination. Panalpina had actually been providing material management for BP in Ulsan from 2010, when the project first started. But once the vessel set sail, Panalpina managed the delivery of smaller items requested by the crew or captain during the tow.

Ship agency services involved obtaining inward and outward clearance for the FPSO, including clearances for crew signing on or off the FPSO; arrangement of ship supplies and waste disposal. Highly-detailed documentation was sent to each port’s authorities in advance of arrival to ensure the vessel and its supply ships would be granted permission to come into their territorial waters. The paperwork included vessel specifications, crew registration details including functions, nationalities and individual visa details, and a list of material on board – which was a mix of crew belongings and structural material or machinery.

Husbandry covered the most crucial aspects of the project, the organization, safety and security of the crew. Panalpina was responsible for immigration and customs assistance for arriving and departing crew (no small feat when there are between 140-160 people to account for), meet and greets for crew signing on and off the vessel, crew transportation to and from hotels and airports, crew accommodation, and medical assistance.

Panalpina thankfully didn’t need to arrange any medical assistance during the tow, but when the FPSO arrived in Haugesund, the team had an unexpected and very urgent request. An Indian crew member who was returning home to get married just a few days later was not permitted to leave the vessel because his visa had expired while on board. But thanks to great cooperation with Norwegian immigration and the local authorities, who even provided a police escort to the airport, Panalpina got him home in time for his wedding and all within 24 hours of arriving in Haugesund.

To find out more about what it is like to live and work on board an FPSO, look out for the third and last installment on July 7. 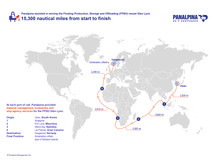 The route of the Glen Lyon 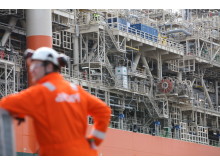 Superstructure of the Gle... 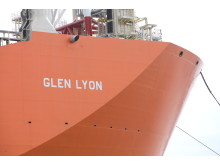 Bow of the Glen Lyon 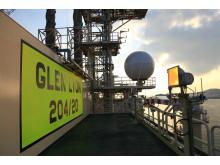 Deck of the Glen Lyon